As a remake, Maverick Hunter X provides a large amount of changes and new features to the original Mega Man X experience.

Unlike Mega Man Powered Up, Maverick Hunter X is a reboot to the X series. It was the intention of Keiji Inafune to completely redo the first six games of the Mega Man X series in this new continuity, but this project was discontinued due to poor sales of Maverick Hunter X. Examples of the remake's continuity changes are: 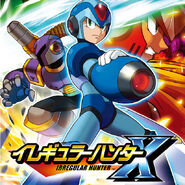