Mobile Phones (via I-mode in Japan)

January 2006
Mega Man Pinball, known as Rockman Pinball (ロックマンピンボール, Rockman Pinball) in Japan, is a spin-off in the Mega Man classic series. The game was first made available in 2004 via I-mode's subscription gaming service to Japanese mobile phone users.

The game features three Robot Masters from Mega Man 2 (Air Man, Bubble Man and Quick Man) in pinball stages that are modelled after their stages from the game. Each stage has two screens, the first having a door protected by a Lightning Lord and the second with the boss inside a door that must be hit to be destroyed, and once open the player can hit the boss. After defeating the three bosses Dr. Wily appears, his stage resembling Crash Man's stage. 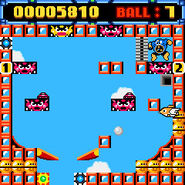 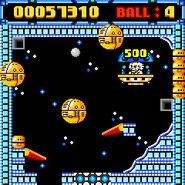 Dr. Wily
Add a photo to this gallery

Retrieved from "https://megaman.fandom.com/wiki/Mega_Man_Pinball?oldid=344917"
Community content is available under CC-BY-SA unless otherwise noted.