The game revolves around a fifth-grader named Geo Stelar (which the player can rename) and his alien friend from Planet FM, Omega-Xis. Geo has been mourning his father's disappearance, Kelvin Stelar - a scientist and an astronaut, who was lost in space when the space station, "Peace", exploded three years prior to the game, which caused Geo to stop going to school for three years.

One day, Geo comes home to find a friend of his father and co-worker at AMAKEN space agency, Aaron Boreal, conversing with his mother, Hope Stelar. Aaron gives Geo the Visualizer which belonged to his father, a glasses-like item which gives the user the ability to see EM Waves and the EM Wave World. As Geo leaves to his usual spot at Vista Point he encounters three of his class mates, Luna Platz, the class president (also known as "Prez"), Bud Bison, a bulky kid who shows aggression towards Geo and acts as Luna's bodyguard, and Zack Temple, a short kid who is very smart. After the trio fail to persuade Geo to return to school, he is later seen observing the stars at Vista Point. He is struck by a lightning-like Wave, which activates the ability of the Visualizer to see EM Waves. As Geo puts on the Visualizer, he sees Omega-Xis, a refugee from Planet FM who has come to Earth to hide the mysterious Andromeda Key, and claims to know about Kelvin's disappearance. Using the ability of an FM-ian to change a humans Wave Frequency, they are able to EM Wave Change into Mega Man.

Omega-Xis is able to reside in Geo's Transer, a PET like device, and is aided by the three Satellite Admins; Leo Kingdom, Pegasus Magic and Dragon Sky in Mega Man's battles against other FM-ian who come to claim the Andromeda Key for the destruction of Earth by giving him the Star Force, which grants him the ability to transform to the forms - Fire Leo, Ice Pegasus or Green Dragon (which one determined by the game's version).

In the first "chapters" of the game, Geo is withdrawn and has trouble trusting people. However, later in the story he finds Sonia Strumm, a teen pop idol who also has an FM-ian, Lyra, who she can EM Wave Change with to become Harp Note, and although enemies at first, they become friends and Geo forms his first BrotherBand with her. Geo also meets a boy named Patrick Sprigs, who has also lost loved ones - he was abandoned by his parents in a junkyard on Dream Island as an infant. Geo wishes to make a BrotherBand with Patrick because he is lonely as well, which Patrick responds by asking for some time to think about it. Patrick also has an FM-ian partner, Gemini, who he can transform with to become Gemini Spark, one of the main antagonists in the first game. The reason Gemini Spark is an antagonist to Mega Man is because Patrick has a multi-personality disorder (or a split personality), with an other evil self called Rey, and they use Geo only to get the Andromeda Key from Omega-Xis, where the other FM-ians have failed. Gemini is also the strongest FM-ian on Planet FM and the right hand of the FM King, Cepheus.

After Rey's betrayal, Geo is crushed and reveals that he also lost his father in the space accident, saying that he would rather not make bonds with others because of the pain caused when a bond is broken. Omega-Xis leaves, and Geo returns to his old ways of not going to school or seeing anyone. Soon later, Geo is contacted by Aaron Boreal who tells him he has made contact with the space station Peace, only to find out it was seized by the FM King, Cepheus, who is on his way to destroy Earth and feed the human race to the planet destroying weapon - Andromeda. Before Geo leaves, Aaron tells him that his father created the BrotherBand, to create bonds between people and even planets, and that these bonds are the key to a better world, and perhaps even a better universe. Geo's faith in his friends and himself is restored, and goes to find Omega-Xis at Dream Island, where he is confronted by Gemini Spark, who reveals that the one who lead the attack on the space station three years ago was actually Omega-Xis. Geo tries to get to the space station to stop the FM King, but is stopped by Gemini, who is then stopped by Pat. Geo ride the Wave Road to the remains of the space station Peace, and upon reaching the space station Omega-Xis revealed that he changed Kelvin and the crew to EM Beings in order to save them, but says they could be anywhere in the universe. Hopeful, Geo proceeds to the seat of Cepheus, where he sees both the king and Andromeda. The King is amazed by the betrayal from one of his own race, but Omega-Xis reveals that he is actually an AM-ian from the Planet AM who took refugee on Planet FM. Mega Man fights and defeats Andromeda, but spares Cepheus, following his father's dream to create peace with other life. Cepheus asks Geo how he is able to trust others, especially from different planets, and that he (the king) is unable to do so. After Geo convinces him, he promises to retract the destruction of Earth, and calls back the other FM-ians. The three Satellite Admins then appear, and ask Cepheus to help them rebuild Planet AM, the planet he had previously destroyed when they tried to create a BrotherBand with their neighboring planet, Planet FM. They ask Omega-Xis if he will join them, but Omega-Xis admits that he has gotten use to living on Earth.

When Geo is ready to return the Earth, the space station begins to fall apart, and cuts off the way to Earth through the Wave Road, and he is forced to escape through an escape pod. He drifts off in space for some time, and right before Geo gives up hope, somehow, from the endless void of space, Kelvin is able to reach him in a dream, telling Geo he must cherish the bonds with his friends and loved ones, and as long as he believes in his bonds, he will watch over him, no matter how far apart they are.

On Earth, Geo's friends - Sonia, Luna, Bud, Zack and Pat are all at Vista Point and are instructed by Aaron Boreal to use the power of the BrotherBand to reach Geo in space. The strength of the BrotherBand creates a beam which is directed at Geo's Transer, and he is then able to find his way back to Earth. As the pod draws near to Earth, the credits roll, showing the Pod following the BrotherBand beam, and in the background are the star constellations of many FM-ians, such as Taurus or Cygnus, and after some time he reaches Earth.

After the credits roll, a scene is shown that Geo is happily going to school with his friends, reverting from his ways at the start of the game. Omega-Xis and Lyra are seen on Geo's house roof, agreeing to stay on Earth for some time.

The story of the game revolves around the concept of Brotherband, special connections between people's relationships, similar to some kind of strong partnership, or "bond". The story starts with a Brotherband with planet FM, moves on with Brotherbands and relationships beeing constantly reminded of their importance, Megaman unlocking his powers through a brotherband, and finaly, ending with Geo asking to become Brother with king cepheus and planet FM.

The game is rendered in an isometric style during field gameplay, but features a three-dimensional battle system, with the combat being viewed from behind Mega Man, and movement restricted to only left and right. Instead of using of Battle Chips, Mega Man uses Battle Cards, and has the ability to dash enemies (called Mega Dash), due to the fact the player may only move in three panels (front row), while the enemies take the rest of the battle field.

Star Force is a transformation granted by the Satellite Admins: Leo Kingdom, Pegasus Magic, or Dragon Sky, depending on the version played. After a certain point in the plot, the game's Star Force transformation is treated as a Brother card, and can be invoked once it appears in the Custom Screen. Invoking the Star Break allows for Mega Man to select cards in the same row, and also countering an enemy will result in Mega Man drawing his Star Force Big Bang (SFB), a Giga card that can deal impressive damage.

Any previous Mega Man Battle Network Game Boy Advance game (including Mega Man Battle Chip Challenge and the Japan-exclusive Rockman.EXE 4.5 Real Operation) can be inserted into the DS's Game Boy Advance slot to unlock a cameo appearance from MegaMan.EXE. He will give the player an item for Omega-Xis if a task is fulfilled for him, but then quickly escapes back to his own time period. Outside of this easter egg, however, there are only a few references to the events or characters from the Battle Network series.

Like Mega Man Battle Network 6, Mega Man Star Force has a crossover with the Boktai series that was removed outside of Japan. Geo can form BrotherBands with Lunar Knights characters, and in a sidequest Mega Man can help Aaron and Lucian defeat Margrave Rymer.

Changes from the Battle Network series 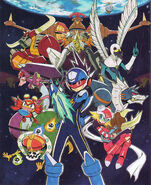 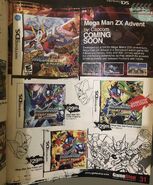 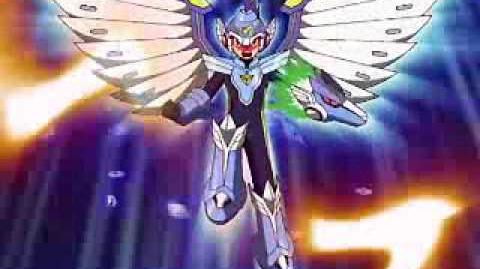