Mega Man V, known in Japan as Rockman World 5 (ロックマンワールド５, Rockman World 5), is the last game from the original Mega Man series for Game Boy. The game has Super Game Boy support, and at one time was considered for a port to the Game Boy Color for Q4 1998,[Citation needed] but the project was eventually abandoned, as players can play this game on a Game Boy Color or Game Boy Advance for full color. Unlike previous Game Boy titles, the game was not a touched-up port of a NES title, but a completely new game with its own storyline, new assets and a full series of new bosses and weapons. This game marked the introduction of the Stardroids. This game is currently available for download on the 3DS Nintendo eShop.

From the game's opening scene:

In the year 20XX AD, the world is at peace thanks to Mega Man. Dr. Wily's fourth attempt at world domination has failed and his name has once again faded from the minds of the citizens of the world. A few months later...
(Rock and Roll are walking through a field and suddenly a mysterious robot appears in front of them.)
Terra: "So, you are the famous Mega Man! I am Terra - and you will soon be my slave!"
(Roll retreats and Rock turns into Mega Man to fight against Terra, but even the charged shot doesn't work on him, and is defeated.)
Mega Man: "What?! My Mega Buster has no effect on him..."
A few hours later, the world was attacked by warrior robots from space.
Mega Man (awakening): "Where am I?"
Dr. Light found Mega Man and equipped him with the new "Mega Arm". The most powerful weapon ever devised.
Why have the Stardroids come here!?

Dr. Light: "Mega Man, our world is once again in chaos. The alien robots call themselves "Stardroids" and have conquered most of our major cities. They are constructed of alien material which render our weapons useless. But, I have done some analysis and constructed a new weapon for you. It will replace your Super Mega Buster. It is called the "Mega Arm" and it allows you to charge energy in your fist before you fire it. I have also created a new assistant for you. His name is "Tango". I'll enhance this item replicator to make powerful items for you. Collect as many P Chips as possible and return to my lab to exchange them for power-up items. Good luck, Mega Man."

Instead of using eight bosses from two NES games like the previous Game Boy games, all eight main bosses from Mega Man V are new and unique.

*The weapons from the Mega Man Killers and Quint cannot be obtained in Mega Man V.

†The Skull Blazer is fought between Terra and Enker.

Overall critical reception for Mega Man V has been average to positive. While many aspects of the game were commended, critics found very little change from previous installments in the series.[1][2][3][4] VideoGames summarized, "If you don't have a Mega Man game for your Game Boy, this one is a good as any. It's entertaining...it's Mega Man. If you're thinking 'rehash', you might be right and it's still a pretty fun game, though."[4] Nintendo Power was impressed by its gameplay and graphics, but felt that the game is too short, "especially when you sit down with the Super Game Boy and cruise".[3] GamePro was contrastingly unimpressed with the controls on the SNES, considering the use of Game Boy much simpler.[2]

In 2008, Nintendo Power listed Mega Man V as the 14th best Game Boy or Game Boy Color video game, praising it as the best of a quality series of portable Mega Man games.[5] Game InformerTemplate:'s Ben Reeves called it the 11th best Game Boy game due to its relative ambition compared to its Game Boy predecessors.[6] Mega Man V was available for the similarly named Nintendo Power cartridge service in Japan on April 13, 2001 alongside its four Game Boy Mega Man predecessors.[7] Outside of Japan, the game is considered to be quite rare.[8][9] All five games on the Game Boy were to be released as part of a Game Boy Advance compilation in 2004 titled Mega Man Anniversary Collection, but it was delayed indefinitely, renamed Mega Mania, and eventually cancelled.[10] In 2011, IGN listed the game among titles they wished to see downloadable from the Nintendo eShop for Nintendo 3DS.[11] On July 18, 2013, it was confirmed that Mega Man V is planned for release on the 3DS Virtual Console;[12] it came out November 6, 2013 in Japan and on May 22, 2014 in North America.[13] 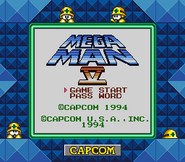 Mega Man fighting against the Skull Blazer in space.

Inside the Wily Star.
Add a photo to this gallery

Retrieved from "https://megaman.fandom.com/wiki/Mega_Man_V?oldid=218928"
Community content is available under CC-BY-SA unless otherwise noted.