Mega Man Volnutt can equip upgrades to his body for easier tasks, such as battle and travelling purposes. Such additions include weapons, built in roller skates for higher speed, helmets, different levels of body armor, and upgrades for his health. This page contains his equipment from the games Mega Man Legends, Mega Man Legends 2, Rockman DASH: 5tsu no Shima no Daibouken!, Namco × Capcom and Tatsunoko vs. Capcom.

Mega Man can equip different weapons in his arms, and with the Lock-on function he can automatically target the nearest enemy.

The Mega Buster, known as Rock Buster (ロックバスター, Rock Buster) in Japan, is Mega Man's main weapon, a rapid firing arm cannon equipped in his left arm. It can be improved with Buster Parts, which modify four stats: Attack, Energy, Range and Rapid. MegaMan is only allowed 2 Buster Parts at a time, but upon obtaining the item Adapter Plug, he can equip 3 parts.

Special Weapons (特殊武器, Tokushu Buki) are Mega Man's secondary weapons, attached to his right arm. They are developed by Roll Caskett with objects found by Mega Man, and she is able to improve their abilities. Mega Man can carry only one Special Weapon with him at a time, so he must decide which weapon to take with him. To change weapons, Mega Man must talk with Roll in the Support Car or in the Flutter (and also in Nino Island during the attack of the Birdbots). He can equip or unequip weapons in the pause screen.

Special Weapons have limited energy, shown in the Special Weapon Gauge to the right of the screen. In Mega Man Legends 2, the Special Weapon Gauge has two bars instead of one, a green bar to the left showing the energy currently in use and a blue bar to the right with reserve energy. The green bar decreases when the weapon is used, recharging automatically when not firing by taking energy from the blue bar. When the energy of a weapon ends, it must be recharged with Data or with the items Hyper Cartridge and Special Weapon Recharge Cube. Note that in Mega Man Legends 2 those will only recharge the blue bar, but both the green and blue bars are recharged when Mega Man leaves the Development Room. The downside to this is that even if the Energy is infinite, the green bar will still deplete on some weapons (which might've been implemented to prevent "spamming" or rapidly firing weapons).

In the first game, most special weapons make Mega Man stand still while in use, the exceptions being the Grenade Arm and Machine Buster. In the second game, Mega Man can move and attack at the same time with 7 of the 15 weapons available, those being the Ground Crawler, Homing Missile, Hunter Seeker, Machine Gun Arm, Reflector Arm, Shield Arm and Spread Buster.

There is a large variety of Special Weapons in the games with varying abilities, such as a powerful bazooka-like weapon, machine guns, explosives, an energy blade, an energy shield for protection, a drill to break down walls, and a vacuum to collect Refractor shards.

In the first game and on Rockman Dash: Episode 1, Mega Man's special weapons are colored to his color scheme, blue with some gray. In the second game, the Special Weapons now have colors different from Mega Man.

Volnutt also uses this kick as an attack in Tatsunoko vs Capcom.

Lifter (持ち上げ, Mochi age) is an action from Mega Man Legends 2 used by Mega Man with the right arm when he isn't equipped with a Special Weapon. He is able to lift light objects and enemies and throw them, causing damage to other enemies hit. Mega Man can lift enemies that cause negative status by contact, like burn and freeze from some Horokkos and Frongels, without receiving the status.

When holding a Jakko, Mega Man will descent slowly if the jump button is held. Snorubit is the only enemy that can escape from Mega Man when hold. If Mega Man attempts to lift Roll Caskett in the Calinca tundra, she will slap him.

Mega Man can equip upgrades to his body for easier tasks, such as battle and travelling purposes. Such additions include built in roller skates for higher speed, helmets, different levels of body armor, and upgrades for his health and buster.

When Mega Man is hit, sometimes he may hit his head in the floor, causing 8 damage to him. The helmet protects his head from this extra damage. Some helmets prevent him from being knocked down or allow him to automatically roll out of danger when he takes multiple hits.

Mega Man's body parts can be replaced by sturdier parts to increase his defense. In the first Mega Man Legends game, only the Flak Jacket is available, upgrades becoming available when the weaker version is bought. Once upgraded, the armor can't return to its previous version, but Mega Man is able to unequip his current armor. The second game has several armors available.

By swapping foot parts Mega Man can improve his mobility, being able to dash to move faster and increase his jump height. Separate parts can be attached simultaneously to the areas around the calf and below the ankle to allow for multiple power ups. In the second game some parts protect him from hazardous floors.

In the first two games the skates are developed by Roll.

Jump Parts (ジャンプパーツ) made with Spring Set (スプリングセット) found in Cardon ruins, chest in high area before the barrier.

Other parts and items that increase Mega Man's survival chances. 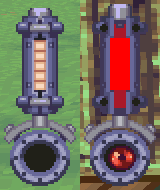 Life Shield (ライフシールド, Raifu Shīrudo) is a feature from the first Mega Man Legends game that reduces the damage Mega Man receives from enemy attacks. When the Life Gauge is bright red, the shield is disabled, but it will normally recharge itself after a while. However, if it takes a strong enough hit, the shield will break and stay red, requiring to be repaired with Data or the item Shield Repair. The shield will always break when Mega Man's health reach 0 (also saving him from a fatal attack), regardless of the strength of the attack received.

Alarm Lamp (警報ランプ, Alarm Lamp), also known as Warning Light, is a lamp below Mega Man's Life Gauge that lights up when an enemy is nearby.

On Mega Man Legends 2, Alarm Lamp only triggers if the enemy is behind or at Mega Man's blind spot.

In the Rockman DASH 2 4Koma Gag Battle, some comics involve Mega Man's equipment. Below are some of them.

Mega Man's equipment.
Add a photo to this gallery

Add a photo to this gallery
Retrieved from "https://megaman.fandom.com/wiki/Mega_Man_Volnutt%27s_equipment?oldid=255797"
Community content is available under CC-BY-SA unless otherwise noted.