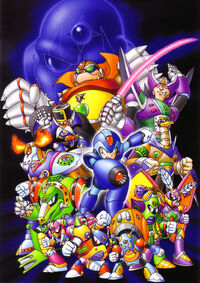 This is the fastest route to collect all of the 16 items in the game. Each step assumes you are defeating the boss at the end of that stage unless otherwise specified or they have already been defeated. It is recommended to die to exit Overdrive Ostrich's stage on the first visit as he may be too difficult for some players and his weakness will not yet have been acquired.

The only real difference between this fight and the one prior is that now Violen summons blocks that appear in random spots in the room you fight him in. These blocks can either help you or hinder you when Violen unleashes his mace ball attack. As for battle strategy, Bubble Splash is the weapon he is weak to. But due to its short range, you would probably be better off just hitting him with super-charged X-Buster shots (hit him with the double X-Buster shot for extra damage).

Fighting Serges isn't as difficult as some would make it seem (that is if you know what to do). First, destroy the 4 turrets at the front of his machine. One Silk Shot should take out a single turret, thus making Serges move the machine closer to you. Once all four turrets are down, Serges will be exposed and you can hit him now. Sonic Slicer is the weapon to use on Serges, but it will be hard to land hits with simple shots as the Slicer takes a second to reach full speed and Serges is always moving around. A good way to avoid damage and hit the X-Hunter is to jump down onto the exposed piece of the machine where the turret wall used to be. Standing here will give you a better chance at avoiding Serges' attacks and land more effective hits. While down there, charge up the Sonic Slicer and unleash the blade rain on him. They do much more damage than single shots of the Slicer and if you stand in the right spot, you'll almost always land a hit.

Obtain the final upgrade by making your way to the top right hand corner of the level. You'll approach a section where you gradually climb by moving a flying board that changes directions and takes you up the screen. Manoeuvre your way up the screen, and when you get to the top, continue by taking the board into the right (towards the wall spikes). You'll notice a set of stairs at the top of the screen, which can only be accessed by jumping off the flying board, so make sure to bring the board all the way to the top. Climb, and make your way to the right, using Speed Burner to make your way over the spikes as required. The most difficult part of this section is when you reach the top right-most part of the level, where there is a set of spikes surrounding an extra life. Dash jump your way across the first set, and Speed Burner your way to the left just before you land on the next set of spikes to obtain the extra life. Go down the opening, but cling to the left wall all the way down. About halfway down you'll fall into a hidden opening, where if you've collected all the heart pieces, containers, and upgrades, a capsule will be there to give you the final upgrade: a flaming uppercut, which is an instant kill to bosses. It can only be used when you have full health, and is performed with [down + left/right + fire]. Another one of Capcom's tributes to Street Fighter character Ryu, but this time it's the 'shoryuken' uppercut (a similar secret weapon existed in Mega Man X, giving X the 'hadoutken' shot).

The easiest way to defeat Agile is to charge up the magnetic mine and jump up and fire it at him, it will move through him slowly doing max damage, dodge his attacks by dash jumping over the holes in the floor.

The fourth X-Hunter stage is the classic Mega Man stage with a rematch against the eight bosses. They can be fought in any order.

This is Magna Centipede's stage, except that the music changed to the one from the Opening Stage. So for the walkthrough, refer to the first visit. The stage is the same until where the Chop Register was. If you didn't get the Zero Parts, you'll face... ZERO! He fires charged and normal Z-Buster shots, slashes with his Z-Saber, does a giga impact, where he slams his saber into the ground, which causes debris to spray. Worst of all, he blocks every weapon! He can only be hit when he fires his buster or has his back to the screen. You only need to deplete his energy column until he has 1 bar left, then you win. If you collected all the Zero Parts, there will be a black Zero instead, which Zero destroys. Either way, he'll destroy a section of the floor, and he tells X to go after Sigma, while he tries to destroy the Central Computer. Drop into the hole and when you hit the bottom, the fight with Sigma will begin. Sigma will sometimes dash at you, then slash with his claws. He'll also fire electric shots. They home in to where X is located. Luckily, they only need to lock on to X, so scatter the shots. It's best to stay away from Sigma and fire at him with charge shots or with Sonic Slicer that is his weakness. When he's low on health, he'll gain a new attack: Nightshade Electric Spark. This acts exactly like the Electric Spark's charge shot from Mega Man X1. Stay on the top to avoid this. When Sigma's defeated, it's not over yet. Sigma finally reveals his true form: the Sigma Virus. In this form, Sigma is a giant wireframe version of his head. You'll notice that this form of Sigma does not have an energy column, so this is more like a miniboss fight. There is, however, a way to find out how much health he has left: His color. When he's green, Sigma has either full health or he has lost very little health. Sigma goes from green to light blue to dark blue to orange to red and finally to dark red. Sigma reflects almost all weapons, except for the Strike Chain, the Shoryuken (which you can use if you want to be cheap), and Level 3 or higher X-Buster shots. He'll use Viral Laser, where he fires a laser straight down. He also uses Viral Summon Shot, where he fires blue wireframe orbs that become either Scrivers, Tiranoses, or Fisherns. When he's red or dark red, he'll use his ultimate attack: Error and Delete. He'll appear on X and drain X's health. Keep dashing when he disappears to avoid this. Sigma takes 56 hits in his virus form. Now watch the ending.

Retrieved from "https://megaman.fandom.com/wiki/Mega_Man_X2_Walkthrough?oldid=319833"
Community content is available under CC-BY-SA unless otherwise noted.