Mega Man X5, known as Rockman X5 (ロックマンX5, Rokkuman Ekkusu Faibu) in Japan, and often shortened to MMX5, or just X5,[2] is the fifth game in the Mega Man X series and the second X game on the PlayStation console. It was initially released in Japan on November 30, 2000, and in North America and PAL territories the following year.

It should be noted that series creator Keiji Inafune originally intended for this to be the last title in the Mega Man X series, with Zero dying and resurrecting later in the Mega Man Zero series, but Capcom later decided to green-light Mega Man X6 without his knowledge, changing his plans.[4][5]

Several months after the Repliforce war, Earth is at a peaceful time. The repair of the space colonies damaged during the war was almost complete, the only space colony remaining to be the giant colony Eurasia located in a Lagrangian point. As it was quite old, it was planned to receive an extensive renovation. However, one day someone had occupied Eurasia and took control of it, scattering a virus in the colony and using its artificial gravity systems to set it on a collision course towards Earth. Within 16 hours, Eurasia will crash and cause great destruction, in the worst case extinguishing all life from the planet. The Maverick Hunters plan on using the large particle cannon Enigma to destroy Eurasia before it happens. The Enigma cannon is somewhat old and needs to be upgraded. Signas, the Hunters' new commander, orders Mega Man X and his comrade Zero, as they race against time to collect the four parts necessary to upgrade the Enigma and stop Eurasia before it's too late. To make things worse, Sigma scattered the Sigma Virus all over the world and the parts needed are being protected by Mavericks.

From this point, the story diverges into different subplots:

In any scenario, Eurasia (either complete or only its remains) falls into Earth and the colony virus merges with the Sigma Virus, creating a new virus in the location of the collision in the point 11F5646. Alia detected the strange energy of the virus and dubbed it the Zero Virus due to its similarities with Zero. The Hunters go into Eurasia's remains to verify the virus. If Zero became a Maverick, X still feels as if he can save Zero, so X fights through the area to get to Zero and help him.

Upon entering the third Zero Space stage, X and Zero confront each other, the dialogue changing depending of the character currently used:

Either way, both X and Zero fight in a room where Dr. Wily's mark is displayed prominently in the background, and just as the fight is ending, the opponent uses Soul Body on the player to weaken him. They lie exhausted on the ground. Sigma appears out of nowhere intending to finish X off. Zero jumps in front of X's prone body and protects him from Sigma, claiming to know everything Sigma is trying to do.

Sigma concedes defeat and vanishes for the moment, saying he will be waiting. The Hunters then prepare for the final battle against Sigma.

Once in the final chamber, Sigma reveals that his entire plan hinged on awakening Zero from his "false self" and giving him his true power by infecting him with a massive amount of the Sigma Virus, scattering it around the Earth. But, as the amount was not enough to awaken him, he used the colony as a virus and let it land on the Earth. The Hunters fight Sigma, who loses and reveals his final body; a huge, unfinished battle body. Sigma tells X of an old man he met, with a seemingly undying hatred for X. If the player is Zero, Sigma tells him of the same man, who supposedly knows enough about Zero to be his own father (at this point, it is obvious that Sigma is referencing Dr. Wily). X and Zero fight Sigma's last body and defeat him, but Sigma has one last trick up his sleeve; he self-destructs, attempting to take both of them with him.

After the explosion, the extent of the damage is shown; Zero's body lies shattered on the ground, his lower torso and left arm apparently destroyed in the blast. X kneels down to pick up Zero's broken body and pleads with him not to die, not noticing Sigma's severed head charging a blast behind him. Sigma fires an energy blast at X, catching both him and Zero in the chest and creating a hole there. This blast seemingly jars Zero from death, as he smiles and blasts Sigma's head with his Z-Buster, finishing him for good. He lies on the ground and calls for X, noting that his friend's optimism at the thought of Zero living is what lead to his death.

In Zero's ending, he reflects on his life as a vision of him in his original body fighting the original Sigma (a fight referenced in a flashback in Mega Man X4) comes up. He assumes these visions are due to his power source running out and his memory unit malfunctioning as another vision, this time of a blurred Dr. Wily, comes into view. The focus shifts from the doctor to an incomplete Zero lying on a table, where Zero notes that the old man was creating a robot destroyer. A red and faded image of Iris then flashes through his mind, while Zero apologizes to her. He then makes a remark that it would be better for him to die, so as to restore the peace. Zero then tells X goodbye and passes away.

In X's ending, he is missing his lower torso and both arms after Sigma's explosion. A mysterious glowing figure (obviously being Dr. Light) appears and tells X to rest and relax. X is then repaired and returns to the Maverick Hunters. His ending has two varieties:

Mega Man X5 goes on to expand on the gameplay engine of the previous game. Like before, the player can choose to play through the game as either Mega Man X or Zero, traversing through perilous terrain and defeating a legion of enemies along the way with a variety of weapons. Both characters have changed somewhat considerably as well. Unlike previous games, not only can the player switch between both characters before starting a stage, X now starts out with a special armor known as the Fourth Armor, which gives him Ultimate Armor-esque abilities including an air dash and the ability to hover if the player should choose to start the game as X, as well as a Charge Shot that leaves behind a damaging energy orb. The player can choose whether or not to use this armor at the Maverick select screen. Zero's saber attacks are somewhat slowed down but he gains the ability to use his Z-Buster again, albeit very limited in its use as Zero needs to charge the weapon and has to be on the ground and even then, the blast is only as strong as a level 2 charge shot. This function can only be used if the player starts the game as Zero. This is also the first game where Zero also starts out with the ability to Air Dash (and also the only game where it can be powered up by collecting the F-Splasher technique). Zero also has the ability to do a back attack with the second swing of his Z-Saber by pressing on the opposite direction in which Zero is doing his saber attack. This game also added the crouch ability. The FMV sequences, seen in Mega Man X3 and Mega Man X4 (with the exception of the game's opening), have been replaced with still screens and text.

Due to the situation presented in the storyline, the game has a countdown to 16 hours until the space colony Eurasia crashes into the Earth and each stage venture spends one hour. To prevent the crash, the player must collect four essential parts for one of two options: intercept the colony by using the Enigma cannon or kamikaze into it with a space shuttle. One half of the Mavericks possess the pieces for the Enigma and the other for the shuttle. There is a chance that either plan may fail which can change the ending and boss battles, providing for a non-linear progression throughout the game. Dynamo will also show up through predetermined intervals to battle X and Zero, though these battles are to simply stall for time.

As with previous games, cheat codes can be entered for enhancement armors for both X and Zero. As usual, X can gain the Ultimate Armor and Zero can get his black sheen. Unlike the previous game though, Zero's armor is no longer a facelift as it upgrades his stats, enhancing his defense and powering up his Z-Saber to a state similar to Tenkuuha although its projectile-destroying ability has been enhanced. 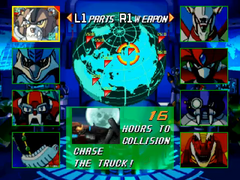 Each of the eight main Mavericks' English names were initially based on the name of a member from the rock band Guns N' Roses.[6] This name localization was brought about by Alyson Court (voice of Claire Redfield from Resident Evil, another Capcom franchise), in tribute to her then-husband, Erik Suzuki, who was a fan of said band. However, for the Mega Man X Legacy Collection 2 release, their names are changed to be more similar to their original Japanese names, thereby restoring the Maverick naming convention seen in the first four X games that the original American release had strayed away from. [7] Names from the Mega Man X Legacy Collection 2 re-release go first, followed by the names from the original English PlayStation release and Mega Man X Collection. 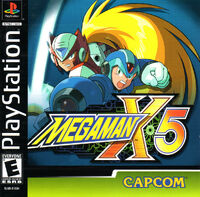 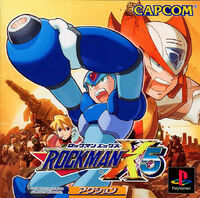 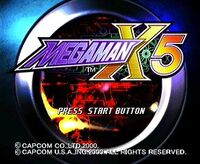 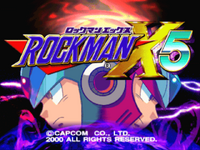 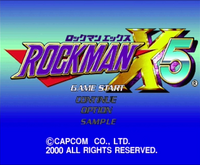 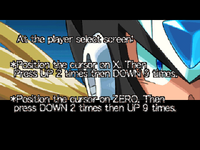 The extra screen after the game is left idle for about 5–10 minutes. 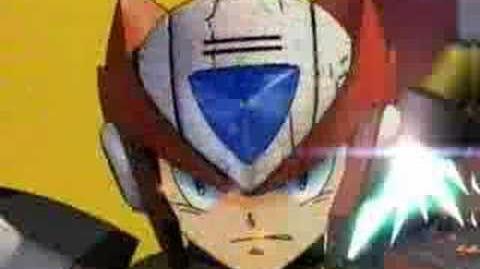 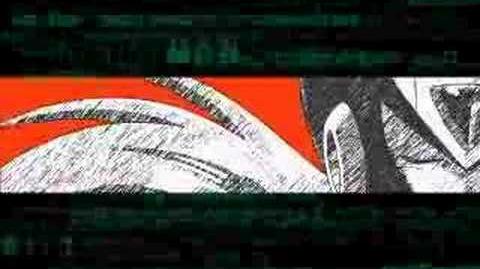 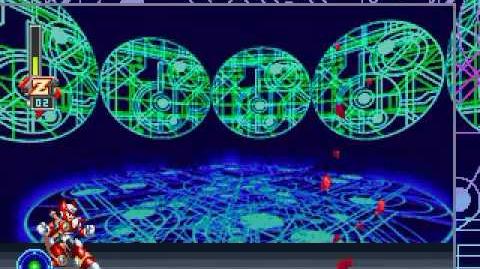 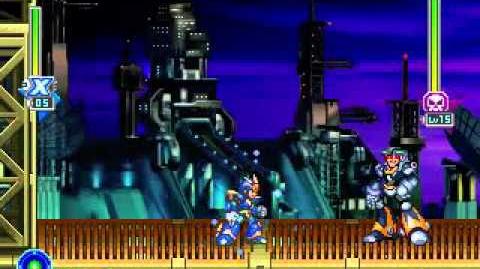 The story of Mega Man X5 was adapted into a 12-chapter manhua by Wu Heyi with a more humorous tone. It is now out of print.

A one-shot manga titled "Rockman X5 IF" by Iwamoto Yoshihiro was released through the Rockman X 25th Anniversary Memorial Carddass Edition in Japan on 22 November 2018. It's considered to be Iwamoto's alternate ending to Mega Man X5.

Mega Man X5 was met with generally positive reviews, with most of the praise going for the graphics, gameplay and soundtrack.

However, the game also received some criticism with this being mostly targeted at Alia's transmissions during stages, the backtracking for optional items being more exigent than previous games, and the removal of animated cutscenes (and to some extent voice acting) like the ones in X4.