(Note: X6 story follows X5 canon: Though Eurasia is 86% destroyed, some of its remains still crash on Earth. Zero is severely damaged (near destroyed) while battling Sigma as seen in X5. He disappears & his Z-Saber is kept by X in honor for his fallen friend.)

Three weeks after the crash of the Eurasia colony in Mega Man X5, the Earth's surface is badly damaged, and humans have been forced to live underground to survive from the pollution. Reploids have been sent to the surface to attempt to make it livable once again. There were no trace of Mavericks for some days, and the Maverick Hunters help clean up the world. Gate, a Reploid scientist who was once a colleague of Alia, stumbles upon the crash site of Eurasia, finding something unusual. After that, Gate became mad and a strange set of Maverick outbreaks occur, and when X is called to stop a giant Mechaniloid, he sees a purple-like figure that resembles Zero. Around the same time, a powerful Reploid named High Max appears and claims to be investigating the Zero Nightmare, and they fight. High Max, however, proves to be too strong and X cannot damage him with his X-Buster.

A Reploid scientist named Isoc makes an announcement saying that the ghost of Zero, Zero Nightmare, is behind the new Nightmare Phenomena. He sends eight Reploids to investigate areas with high jamming suspected to be infected by the Nightmare to discover the mystery surrounding it and delete Zero's ghost, with High Max leading the mission. Isoc also ask for volunteers to help them. X goes off to the suspected areas to investigate the Nightmare, defeat the Mavericks, and rescue the Reploids that volunteered to help.

During his mission, X fights against the Zero Nightmare and finds the real Zero, who was believed to have been destroyed after the last encounter with Sigma. Signas is reluctant to ask Zero's help as he had just returned, but due to the crisis, Zero helps X in the mission.

After defeating the Mavericks, the Maverick Hunters discover Gate was behind the Nightmare Virus. Gate is impressed with the abilities of X and Zero, and challenges the Hunters to a duel, revealing to them the location of his hidden laboratory. In his laboratory, Gate also reveals he was able to create the Nightmare and High Max by analyzing Zero's DNA, which he found in Eurasia's crash site. X and Zero defeat High Max and Gate; Isoc was later found unconscious in a similar way to the Erasure Incident (mentioned by Alia when playing as X). Upon Gate's defeat, Gate reveals he had revived Sigma. Sigma states that he didn't need his help to be revived, attacks Gate and retreats. X and Zero rush to stop the partially-reconstructed Sigma and battle him, and although he was not fully complete, he puts up a good fight. In the end, the Hunters prove victorious, defeating Sigma and removing Gate's body from the wreckage of his lab to attempt to repair him.

Mega Man X6 is identical to its predecessor in terms of general gameplay, traversing through dangerous terrain while defeating a legion of enemies throughout the way. Unlike the previous two games, the player starts out the game as X. However, X has changed considerably. While he starts out with the Falcon Armor, most of its special abilities have been lost, but for a trade in, he can use Zero's Z-Saber as an alternate weapon, although he wields it with less skill and thus can only use single swings. Some areas contain a portal which X can go through. Should he enter one, he will enter an extra area which will lead to a battle with a boss version of Zero known as the Zero Nightmare. Winning this battle will reveal the real Zero and unlock him as a playable character. While he has not changed much, his Z-Saber has a somewhat longer reach and its appearance has changed into a straight sword. His Z-Buster also fires faster but can only be fired on the ground as usual. This is also the first game in the series that Zero can double-jump without having gained a special technique first.

X can gain more than two armors as usual though they must be assembled before they can be utilized: The Blade Armor, which enhances X's melee potential with the Z-Saber and the Shadow Armor which ups his maneuverability and grants him immunity to spikes.

In each stage except the last one exists the Nightmare Phenomenon, strange helix-based enemies that, although weak, can prove troublesome. Though they have no sufficient means of attack, they will often attempt to infect Rescuable Reploids (who the player must save in order to obtain bonuses and upgrades) and turn them into enemies. Defeating a Nightmare will yield a Nightmare Soul which can be used to upgrade how many parts can be equipped to a character. A Soul must be retrieved quickly before the Nightmare revives itself where it will not yield it a second time. 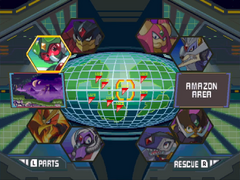 According to the Japanese magazine Famitsu, Mega Man X6 was the seventh best-selling game in Japan during its week of release at 39,318 units sold.[3] Dengeki Online reported that Mega Man X6 sold a total of 106,980 units in Japan by the end of 2001, marking it as the 109th best-selling game of the year in the region.[4] The game eventually saw a re-release as part of the PlayStation the Best range of budget titles.[5]

Outside Japan, Mega Man X6 received mixed to positive reviews, with an average score of 68.74% on GameRankings.[6] GameSpot gave the game a 7 out of 10, saying that the game is "a disappointing effort. The nightmare system and item collecting add variety and longevity to the game, but... The graphics aren't really even up to the standards set by older games in the series, and while the music is good, there aren't any tracks that particularly stand out. Despite these shortcomings, it's still Mega Man, and the gameplay is still entertaining, making X6 an attractive package for hard-core Mega Man fans."[7] IGN gave a more positive review, an 8 out 10, stating "It's an all-new Mega Man game, yet it's still pretty much the same. There's nothing wrong with that"; they praised the soundtrack and replay value.[8] 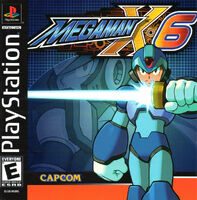 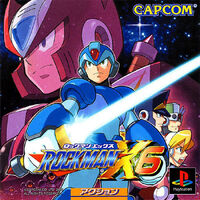 Japanese cover art.
Add a photo to this gallery

Stage select screen.
Add a photo to this gallery