Mega Man X: Command Mission, known as Rockman X Command Mission (ロックマンXコマンドミッション, Rockman X Command Mission) in Japan, is the second-to-last game in the Mega Man X series to be released. It was released on both the PlayStation 2 and the Nintendo GameCube and is primarily RPG-style in nature, playing quite similarly to Capcom's signature Breath of Fire series in a number of ways. The game is considered non-canon to the X series, and set outside of the main storyline in an alternate timeline.[1] Chronologically, it is currently the last game in the series, taking place sometime in the twenty-third century (22XX time period).

In the year 22XX AD, a mysterious mineral known as Force Metal was extracted from the fragments of a meteor that landed in the Pacific Ocean. Technology based on the metal revolutionized the field of Reploid Engineering.

The government built Giga City, an artificial island, near the meteor site for the explicit purpose of mining and smelting Force Metal. Everything seemed to go well until a band of renegade Reploids armed themselves and launched a rebellion on the island. They banished all humans from the island, and demanded that the government recognize Giga City as an independent Reploid state.

Its leader, Epsilon, was branded a Maverick by the government, who dispatched a Maverick Hunter team to Giga City to liberate the island from Epsilon's grasp.

As X, Zero, and Shadow travel to the Lagrano Ruins, a collapsed pillar separates them. X must then fight his way to a place where he and Zero are reunited. Upon reaching Epsilon's destination, Shadow betrays the team, Epsilon's Cadre appears and knocks Zero away. X has no choice but to escape and gather up a team to assist in defeating the minions of the Rebellion army.[2] 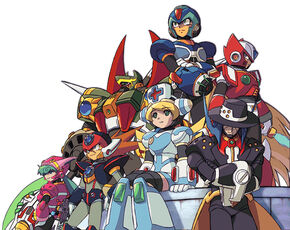 European PlayStation 2 cover art.
Add a photo to this gallery

Mad Nautilus
Add a photo to this gallery 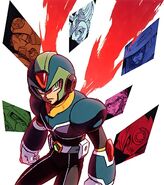 Strategy guide
Add a photo to this gallery

Retrieved from "https://megaman.fandom.com/wiki/Mega_Man_X:_Command_Mission?oldid=306269"
Community content is available under CC-BY-SA unless otherwise noted.