Single-player, multiplayer (minigames only)
Mega Man ZX, known in Japan as Rockman ZX (ロックマンゼクス, Rokkuman Zekusu) is the first installment of the Mega Man ZX series, released in Japan on July 6, 2006 and in North America on September 12, 2006. The game takes place over 200 years after the events from the Mega Man Zero series.[1] This is the first main Mega Man game where the player can choose between a male or female hero.

The game takes place on a technologically advanced world centuries after Mega Man Zero 4. Humans and Reploids now coexist peacefully, both treated as humans due to the new laws.

In time, the habitants of Earth managed to revive some of the former nations. However, preventing further prosperity like the days of old, incidents around the world began where some of the machine life forms became Maverick, making some areas dangerous for the inhabitants, and soon this activity obstructed exchange between nations.

The nations became divided into areas designated as the Inner, where it was safe for humans to live, and the Outer region where the dangerous Mavericks appeared. Great developments were made due to the efforts of the corporation Slither Inc., which possesses technology unearthed from historic ruins in the outlands. Peaceful life is maintained by receiving the technology offered by Slither Inc. in the central areas of cities.

In the frontier regions where the crisis management of countries still doesn't reach, damage from attacks by Mavericks (general term for Reploids and Mechaniloids that threaten the peace) still occur. The humans in these areas developed the self-defense organization known as the Guardians. They defend the frontier regions and investigate the cause of the Maverick element.

Slither Inc. uses the technology developed from historic ruin finds essentially as a lifeline for the cities, providing goods to its people such as energy resources. It is not necessarily a bad thing that the company has more or less grasped the lifeline of the cities, at least for the people in those cities. Slither Inc.'s president is named Serpent. Serpent is considered a wonderful person who raised the company on his own by excavating the ancient technology sleeping in the Outlands. Furthermore, he has arranged a Mechaniloid army in his company, and is said to have repeatedly saved countries from Maverick attacks in the past.

On the other hand, the Guardians in the frontier regions are considered to be unassociated private ventures. They make the "Guardian Base," a gigantic flying ship, their headquarters, and they take people on a volunteer basis to not only defend the frontier areas but also investigate the Maverick source. The original leader of the Guardians disappeared during the investigation of an Outlands area, and command has been taken over by the young girl named Prairie. The game begins with Girouette and Vent/Aile delivering a package to the Guardians containing a Biometal.

Vent, the male protagonist, is about 14 years old. He's an orphan who works as a transporter. His boss and caretaker, Girouette, is a kind and gentle man, who runs Giro Express. His mother was killed during the Maverick Raids. He is the Biomatch for Model X.

Aile, the female protagonist, is about 14 years old. She's an orphan who works as a transporter. Her boss and caretaker, Giro, runs Giro Express. Her mother was killed during the Maverick Raids. She is the Biomatch for Model X.

Vent and Aile use the M.E.G.A. System (Meta-Encapsulated Granule Awareness SYSTEM), known as the R.O.C.K. System (Rebirth Of Crystallised Knowledge SYSTEM) in the Japanese version, to activate the Biometals and transform into a form similar to what the Biometal was based on. In the English version, anyone who uses the M.E.G.A. System is called a "Mega Man". In the Japanese version, anyone who uses the R.O.C.K. System is called a "Rockman". Rockmen typically hold out a Biometal in front of them and cry out "R.O.C.K. On!" (Megamerge in English) to activate the Biometal. This process is called Megamerging in the English version, although the characters still say "Rock On" because the game did not get an English vocal dub.

The player initially begins with only Model X, but upon obtaining Model Z, Model X is used to fuse with the other Biometals. This is called Double R.O.C.K. On in the Japanese version, and Double Megamerge in the English version. At this point, Model X can no longer be used alone for the rest of the game until it is unlocked by completing the game with both characters in normal or hard modes only. Biometals of the Four Guardians from the Mega Man Zero series are found throughout the game, and these are the only Biometals that can be upgraded with Energy Crystals. These four Biometals use the touch screen in various ways. A seventh Biometal is available after completing the game and fulfilling certain requirements.

The Overdrive Invoke System (or O.I.S.) can be activated on the Biometals of the Four Guardians, giving special abilities to the player. Model HX, FX, and LX will give the player elemental attributes to some of their attacks (similar to the elemental chips from the Mega Man Zero series), while Model PX gives the player double damage and the ability to dash through enemies. By charging their weapons, the four Biometals are also able to perform attacks similar to the Four Guardians. For example, Model HX can summon a hurricane and Model PX can throw a large shuriken. However, O.I.S. consumes Weapon Energy and once it runs out, you can't use the Model's special attacks until you get more energy.

Players can also revert to Humanoid form at any time. Although Vent/Aile cannot attack, dash, or wall-climb without a Biometal, they have some abilities that are impossible to do with a Biometal. Vent/Aile is able to crouch and crawl, fitting through tight spaces otherwise impossible. They will float to the surface of water instead of sink, some NPC characters will be too afraid to speak to Vent/Aile when they are using a Biometal, and enemies will not become hostile in certain areas.

Known as the "Blue Mega Man", it is the first Biometal obtained, giving Vent/Aile the X-Buster and one ability from the Mega Man X games. The X-Buster can charge up a double shot, similar to the Buster upgrade from Mega Man X2. Model X is lost early in the game upon receiving Model Z, but can be used again after completing the game as Vent and Aile in Normal or Hard mode. This Biometal is based on the legendary Mega Man X. Cannot use O.I.S.

The "Red Mega Man", it was the second Biometal obtained, while Giro was the first to use the Biometal. Model Z only had a Z-Saber, but it was slightly curved while Model ZX curves when used. This model is based on the legendary Zero of the Mega Man Zero series. This Model is a supporting character and not playable. It is unknown if it can use O.I.S.

The "Ultimate Mega Man", it is the result of combining Model Z and Model X, it looks similar to Zero from the Mega Man Zero games and has a gameplay experience similar to that series, with both a Buster and Saber available to the player. The model's weapons are ZX Saber and ZX Buster. Cannot use O.I.S.

The "Mega Man of Wind", a form that resembles Sage Harpuia, with many of his abilities. Vent/Aile can air dash both vertically and horizontally, hover, and use Harpuia's double saber "Nitouryuu". The touch screen displays the weak spot in Pseudoroids, which is the location of the Biometal. It also displays the health of enemies. Model HX has the Thunder (weak to Ice attacks and strong against Fire-based enemies) element. When O.I.S. is in play, it makes Model HX's attack Thunder-based. When charged, it can create electric balls or a whirlwind.

The "Mega Man of Fire", it is a form with Fighting Fefnir's abilities. Vent/Aile uses two "Knuckle Busters" named "Nichou", busters that resemble Fefnir's buster cannons, Sodom and Gommorah. Similar to Fefnir, Vent/Aile can shoot directly upward. The touch screen displays FX's special ability, "Buster Edit". The player can draw on the touch screen a path for which the buster shots from either buster will follow. Upgrading FX will allow the player to draw longer paths. Model FX has the Fire (weak to Thunder attacks and strong against Ice-based enemies) element. They can charge for a fire shot or have the ability to create shockwaves on the ground, similar to Fefnir's Earthquake attack. When O.I.S. is in play, it makes Model FX's attacks Fire-based.

The "Mega Man of Ice", it takes the form of Fairy Leviathan. Using a Halberd for a weapon, Model LX lets Vent/Aile swim and dash freely in water, the only Model which can do so. The touch screen displays a map of the surrounding area. A Cyber-Elf icon appears on the map to highlight any nearby items. Model LX has the Ice (weak against Fire attacks and strong against Thunder-based enemies) element. When O.I.S. is in play, all of Model LX's attacks are Ice-based. When charged, Model LX can create ice platforms or an ice dragon similar to Leviathan's in Mega Man Zero 2.

The "Mega Man of Shadow", a form with Hidden Phantom's abilities, it uses kunai for weapons. PX can latch onto ceilings and other objects such as poles and platforms. A radar is displayed on the touch screen, highlighting enemies and showing passageways,including secret ones. When O.I.S. is in play, he can "phase" through an enemy while dashing. He has no elemental attributes. When charging, he can throw a shuriken or create a shield that can absorb weak enemy fire indefinitely. However, it explodes on physical touch.

A special Biometal that is available after defeating Omega Zero or using a Mega Man Zero 3 and Mega Man Zero 4 cartridge in Area N to defeat four optional bosses from the two respective games. When either method is done, Vent/Aile obtains a mysterious rock. The game must be completed now to obtain the Biometal. Vent/Aile must go speak with Fleuve so he may examine the rock. Vent/Aile will look like a duplicate of Omega Zero, the final boss of Mega Man Zero 3. Model OX has many abilities similar to Omega Zero. It has unlimited O.I.S, which trades off dash attacks and charging the O-Saber, in exchange for some of the devastating attacks used by Omega. Many of Model OX's special attacks are based on the various attacks Zero used in the Mega Man X series. Model OX is only unlockable in Normal or Hard mode.

The original Biometal, formed from the pieces of the core of the Ragnarok Space Station that Dr. Weil (Dr. Vile in the Japanese version) fused with, which was destroyed at the end of Mega Man Zero 4; the Biometal is supposedly a piece of Ragnarok that contains Weil's soul. The original Guardian commander studied these pieces and developed the other 6 Biometals to stop Model W. A small fragment was later found by Serpent 10 years prior to the game, triggering the Maverick outbreaks. Unlike the other Biometals, Model W has its own O.I.S. which increases the speed of Serpent's attacks. It is used only by Serpent at the end of the game.

References made to past games 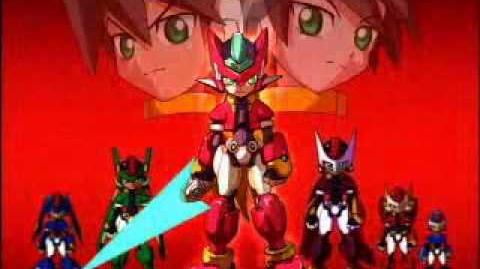 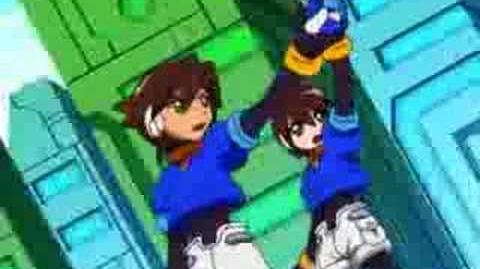 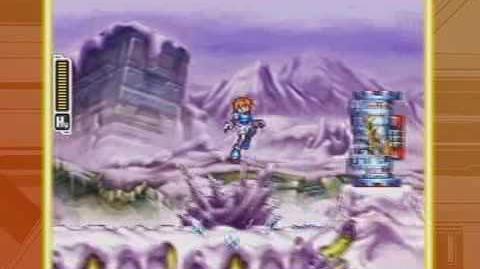