Cartridge
Mega Man ZX Advent, known as Rockman ZX Advent (ロックマンゼクスアドベント, Rokkuman Zekusu Adobento) in Japan, is the sequel of Mega Man ZX for Nintendo DS. The game was first announced at the World Hobby Fair 2007 in Japan. It is the second installment in the Mega Man ZX series.

This game takes place years after the Biometal Model W incident in the previous game, Mega Man ZX. Hunters roam the ruins looking for lost technology, where wild machines called Mavericks live. The government "Legion" oversees and rules over the majority of the world's actions, with its controllers being the Masters: Thomas, Albert and Mikhail (a reference to Drs. Thomas Light, Albert Wily and Mikhail Cossack, respectively). The player can choose between two characters: Grey and Ashe.

Grey has been asleep for an unknown period of time in an unknown lab and is found by two Hunters on a mission. He wakes up without any memory whatsoever, after a battle between the Hunters and the security force (unbeknownst to him). Suddenly, Pandora appears before him and attacks, claiming that he is a "defective and must be disposed of". Grabbing a weapon from one of the dead Hunters that was just in the fight against the security force, he fires at Pandora and runs from the room. From there, the player can take control of Grey. During his escape, he fights against a Dogu the Giant on a bridge. The bridge is damaged during the battle and he falls, later awakening at Hunter's Camp.

The story starts on a Hunter airship containing Ashe and her partners. They were on a mission to collect a Biometal that the Legion is after. The Biometal is being held by illegal hunters, known as the Raiders. Ashe, characteristically brash, jumps ahead of her team onto the enemy ship, starting her journey to locate the Biometal. This is where the player is able to control Ashe. During the mission, Ashe is stopped by Prometheus as she nears the Biometal. Some more Hunters join Ashe to back her up, but Prometheus draws his beam scythe and attacks. Ashe loses consciousness sometime during the short fight and wakes up later in the Hunters' Camp.

Still being part of the Guardian security and now part of Legion, Vent and Aile appear in the game. Vent appears in Ashe's story while Aile appears in Grey's story, both with the Biometals Model X and Z. As the protagonist, the player will have to fight them and learn what they are up to.

Returning from the previous game, Mega Man ZX, Prometheus and Pandora are seemingly the current villains. They are after the Biometal Model A.

Aeolus, Siarnaq, Atlas and Thetis are the new holders of Biometal Models H, P, F, and L, respectively, which were stolen from Vent and Aile prior to the game's start. Like Prometheus and Pandora, they share their names with Saturn's moons. After defeating them in battle, Grey and Ashe can use A-Trans to use their abilities (unlike Vent and Aile, who actually acquired the Biometals). As such, the player actually becomes whatever he or she can transform into, carrying the stance and voice of that form. All of them are participating in the Game of Destiny.

When the Biometals are used by these people, it is noted that they look similar to Vent and Aile's versions, with some differences, presumably because they are using the Biometals on their own, instead of through a Double Megamerge with Model X as Vent and Aile did.

This black Biometal was found by Raiders. It was activated when the hero is cornered by Pandora and Prometheus, transforming him/her into the powerful Mega Man Model A. That Mega Man can gain experience from every battle and appears to have a copy ability (A-Trans) similar to Axl's, as well as dual handguns (another similar trait). When in Model A, wall-jumping and dashing abilities become available. Homing Shot and Giga Crush attacks are also available.

Even though Model A seems to have extremely similar traits to Axl (not to mention exactly the same personality), it was created by Master Albert as a back-up system for himself, similar to his "dummy body" seen in the game prior to the final levels. This is why it is named Model A(lbert). As such, Model A has no confirmed relation to the X series character Axl. It is unknown if Albert had based designs on Model A from information about Axl, or if that was just a coincidence. This issue may have something to do with the disputed canon between games made after Mega Man X6 and the Zero/ZX series. If Model A truly has nothing to do with Axl, his similar attacks and appearance may simply be a tribute to the character.

New features of gameplay when compared to the original ZX game include a homing shot and the ability to carry weapons without a Biometal. There are 6 Biometal forms in total with addition of the 8 A-Trans forms. The other four Biometals are Models H, F, L, P, and ZX. A secret A-trans becomes available when the player starts a new game after obtaining all 24 medals (gained by defeating bosses in a specific manner) in one file. This is known as Model a(ncient), and becomes usable once the player uses the item. It allows the player to use the 'classic sprite' Model A that was used in the Model a minigame.

Unlike the previous game, both Grey and Ashe play differently, while in the previous, playing as Vent or Aile was simply gender preference. Each character has a different charge attack for the Biometal transes (Ashe and/or Grey get some extra moves for certain forms, and even Model A plays differently among them). However, the differences are very slight, with both still acting the same, movement wise and damage wise. Both are still related to Albert in one way or another, have almost exactly the same storyline (with the exception of the completely different beginning), and both still obtain the same transformations. Although picking Grey or Ashe slightly changes the gameplay and storyline, it's still more a matter of gender preference.

Mega Man ZX Advent has a secret ending which can be unlocked after completing the game on Expert Mode (Maniac Mode in the Japanese version) and by playing the game in normal mode (with both players) over and over. It reveals that Albert and Thomas had laid down the laws for Human and Reploid equality, as Humans were given cybernetic implants whilst Reploids were given a limited lifespan that would set them to expire at a predetermined time. Thomas did not appear to be pleased with the outcome as there were supposedly no human bodies for the Reploids nor was there immortality for the humans. Suddenly, the four Mega Men all appear. Thomas revealed that he shares Albert's view, much to Mikhail's horror, but he was not pleased with Albert's method, and thus, sent the Hunters to destroy Albert so that his own plan could come into fruition. The screen blacks out as Thomas speaks in a chilling tone: "This world needs to be reset...", paving the way for a next game in the series (as well as implying that Master Thomas will probably end up being the villain in said next game).

References to other games 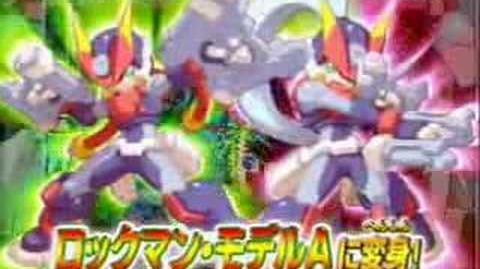 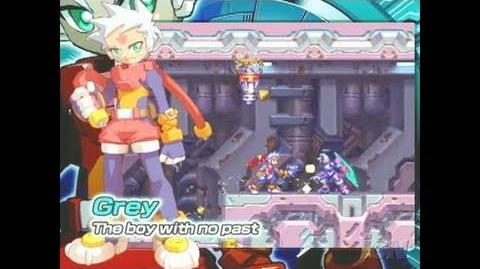 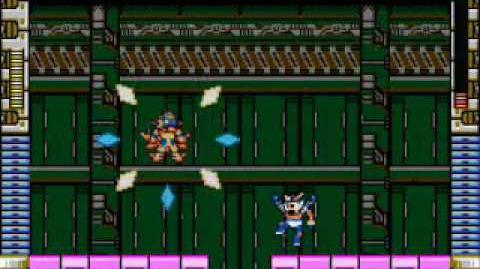