Mega Man Zero/ZX Legacy Collection, known as Rockman Zero & ZX Double Hero Collection (ロックマン ゼロ&ゼクス ダブルヒーローコレクション) in Japan, is the fifth game in the Mega Man Legacy Collection series, collecting the Mega Man Zero and Mega Man ZX series produced by Capcom and Inti Creates. It contains the four games from the Zero series and the two games of the ZX series along with additional content and gameplay modes for both series.[3] It was officially announced on August 27, 2019, and was released on February 25, 2020 on North America, February 27 2020 on Japan worldwide for the Nintendo Switch, PlayStation 4, Xbox One and PC (via Steam).[1]

The collection includes the Mega Man Zero and ZX series in their entirety:

Players who pre-order this collection can get free DLC for ten new music tracks; six of them being remixes from the games included (one for each game) and four bonus selections, which are only accessible in the Music Player.[8]

Similar to the Hunter Medals from the Mega Man X Legacy Collection 1 and 2, ZZ Cards can be collected by completing certain feats within the games, which for most systems excluding the Switch can also award the player with PSN Trophies/Achievement Points. ZZ Cards also unlock Bonus Cards for Mega Man Zero 3.

Much like with previous PlayStation 4 releases that began with the Mega Man X Legacy Collection series dual-release, collecting all the PSN trophies can earn players the Platinum trophy which is only available for this version.

An exclusive piece only found in the gallery by Keisuke Mizuno.

Illustration from the phone stand given as a limited pre-order bonus from WonderGOO.[9]

Illustration from the PC and mobile wallpaper given as a limited pre-order bonus from Amazon in Japan.[9]

Back illustration from the game case jacket given as a limited pre-order bonus from GEO.[9]

Front illustration from the game case jacket given as a limited pre-order bonus from GEO.[9] 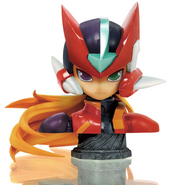