A spread Shot attack that deals damage to the entire party.

Mega Tortoise (メガトータス, Mega Tōtasu) is a large tortoise-type Mechaniloid that was modified for combat, appearing as an enemy in the Mega Man X series that can cause heavy damage.

Mega Tortoises launch small bombs that float down on the player's position with parachutes. Storm Tornado can make short work of them.

Mega Tortoise appear with a different visual design and unlike previous versions, they attack by launching two guided missiles directly at the player.

They appear in Vanishing Gungaroo's Tunnel Base stage and on the left path after defeating Red in Crimson Palace, although they are indestructible there, having retreated into their shells indefinitely.

Mega Tortoise appear in the Gaudile Laboratory and Vanallia Desert, and always start the battle with Jamming in an attempt to blind the entire party. It possesses a barrier that blocks Shot-type attacks randomly. Inflicting at least at least 1000 damage (accumulated) between Mega Tortoise's two turns will crack its shell. This also cancels Shell Bullet. It has a chance to run away in its fourth turn onward, if its shell is not cracked. It will also always drop a Clear Vision if destroyed, to help with healing the Blind caused by its first-turn Jamming.

A broken Mega Tortoise can be found in Vanallia Desert's Quicksand area. It requires a Mini Battery to be repaired and becomes available for use in the Deployment Center afterwards.

Mega Tortoises appear in the Rockman X manga as one of the Maverick minions surronding X and Zero in the forest. 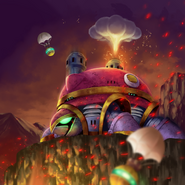 Mega Tortoise, as it appears in Mega Man X7

Mega Tortoise, as seen in Rockman X DiVE
Add a photo to this gallery

Retrieved from "https://megaman.fandom.com/wiki/Mega_Tortoise?oldid=321985"
Community content is available under CC-BY-SA unless otherwise noted.