Mega Water S (メガウォーターＳ, Mega Wōtā S) is an amphibian Robot Master from Mega Man: The Wily Wars with a kappa appearance. He is based on the river sprite Sha Wujing, a character from the Chinese novel Journey to the West. He is the smartest of the three members of the Genesis Unit and is in charge of brain labor, but lacks confidence in himself. He has antipathy towards Buster Rod G.

Mega Water S is a kikokushijo expatriate, and due to this he has a strange Japanese accent. Being based on a kappa, he has a liking for shirikodama, and dislikes raw fish (his localized CD data contradicts this, stating that he likes sashimi).

Mega Water S attacks with harpoon shots while Mega Man is underwater. If Mega Man goes to the surface, he can push him back with a water jet. He also creates a water shield for protection, which can be broken with just a few attacks. He is weak to the Ice Slasher and the Hyper Bomb.

The main weapon of Mega Water S is a spear gun, which loses very little of its power even when used underwater. This weapon is also capable of shooting pressurized water, and is built to resist the force of releasing this water, which allows Mega Water S to use this feature freely while on land. He also has a defense mechanism whose technology is based on that of Bubble Lead, which surrounds his body with layers upon layers of bubbles to form a barrier. To help him resist the intense water pressure when he is deep underwater, his body is filled with liquid. This results in an increased weakness to cold attacks, as the expanding of the liquid when it freezes causes damage to Mega Water S from the inside out.

He appears in the side story "Mega Gandhara" and has a cameo appearance in the last story from Mega Man Gigamix.

Mega Water S first appeared in issue 20, where the Genesis Unit and the Mega Man Killers help Dr. Wily invade the Chronos Institute in an event that will happen in the future. He appears again during the crossover Worlds Collide, joining the other Genesis Unit members and Copy Robot in attacking a party led by Mega Man and Sonic the Hedgehog Mega Water S battled Proto Man, but was destroyed by him after witnessing the defeat of his teammates. He and the rest of the Genesis Unit had been completely destroyed by Mega Man beforehand, down to their IC chips, although the time fluctuations caused by the Skull Egg Zone resulted in their "revival." Mega Water S later returned as part of a massive Robot Master army defending the Wily Egg, but was again defeated; these events were later undone by Mega Man's reversal of the Genesis Wave. 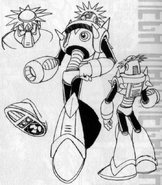 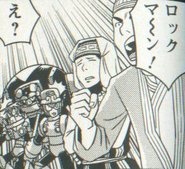 Retrieved from "https://megaman.fandom.com/wiki/Mega_Water_S?oldid=336319"
Community content is available under CC-BY-SA unless otherwise noted.