Episode 1 of the Mega Man cartoon,
Episode 1 of Mega Man: Upon a Star
Mega Man Megamix
Rockman manga series
Rockman X manga
MegaMan NT Warrior
MegaMan Star Force (anime)
Met (a shortening or nickname that comes from the original Mega Man NES manual) is a recurring enemy from the Mega Man franchise. These robots have appeared in almost all incarnations of the Mega Man series, with the exception of Mega Man Legends (although the Shekutens behavior is likely an homage to Mets). Their full name has been rendered in English as Metall (メットール, Mettōru, derived from "all helmet"[5]) or Mettool in earlier appearances.[6] They didn't have a consistent localization in English until 2004 when the name Mettaur was used in all western Mega Man games since, with some exceptions like Mega Man Legacy Collection and Mega Man 11. They are also unofficially called Hard Hats in some strategy guides. Mets wear an indestructible hard hat that makes them invincible while hiding under it, although a few games allow the player to bypass this. For example, they can be flipped with Oil Slider in Mega Man Powered Up and with guard breaking attacks in Mega Man X8.

Mets in the Mega Man series

Mets are recurring enemies in the original Mega Man series, appearing in near every game with varying traits, including some appearances as mid-bosses and bosses. The most common type hides under its helmet and fires three projectiles when approached.

Mets appear in the Mega Man X series with many incarnations, each with their own unique trait. Generally though, Mets behave and look almost exactly like the ones from the original series, albeit there are specialized types of Mets.

The Mets appear in all four games from the Mega Man Zero series, but they don't have any new attribute, being called ancient Mechaniloids. In the first three games from the series, they don't appear as normal enemies. They only appear if Hacker Cyber-elves like Metoras are used to turn almost all enemies of the stage into Mets. These Mets seem to be all from Mega Man 7, the enemies becoming Metall RW (land enemies), Heli Metall RW (aerial enemies) and Swim Metall RW (aquatic enemies).

In Mega Man Zero 4, there are only standard Mettaurs (without RW in its name) in Fenri Lunaedge's stage and in Popla Cocapetri's stage. It's possible to use their helmets as a shield by using the Zero Knuckle.

Mets appears as enemies in the Mega Man ZX series, and a giant Met as a mid-boss. Area H is an abandoned Met-themed amusement park that contains several Mets in the area, including Met balloons, a genie Met and a Met doll in the crane game. The Cyber-elf Met from the Mega Man Zero series also appears in the crane game and in Prairie's room in the Guardian HQ.

Mega Man ZX
Pattrolaur, known as Pattroll (パットロール, Pattorōru) in Japan, is an overfactored patroller Mettaur designed and developed by Slither Inc.. Instead of shooting bullets from its mouth, it uses a baton to rush at foe. It will act docile when Vent/Aile is in his/her Humanoid form. They appear in Area B, Area C and Area D.

Mega Man ZX
Remettaur, known as Metall RE (メットールRE, Mettōru RE) in Japan, is a Met similar to the Metall Mommy. Produced by a factory on Slither Inc.'s request, when a Remettaur is destroyed, mini Mettaurs jump out. The mini Mettaurs appear to be short-fused and explode shortly after. They appear in Area H.

Powmettaur, known as Metall Powered (メットールパワード, Mettōru Pawādo) in Japan, is the mid-boss from Area H in Mega Man ZX. It is a giant Met, similar to the Metall Daddy from Mega Man 4, that was originally designed as an amusement park mascot.

Powmettaur attacks by dropping miniature Mets from the top of its head, spitting balloons with enemies in them, and hovering like a UFO while inside its helmet. It can spit three kinds of balloons that explode into a different enemy depending on what the color is. There is blue for Eyeballoons, green for Mechadragons, and pink for Springers.

Mega Man ZX Advent
VMettaur, known as Metall V (メットールV, Mettōru V) in Japan, is the latest model Mettaur from Mega Man ZX Advent that appears in the Quarry. It spits mini Mettaur bombs. Its cute looks earned it nominations to be mascot for amusement parks, being very similar to Remettaurs.

In the Mega Man Battle Network series, Mets are computer viruses that attack with pickets and shockwaves.

There are three basic Mettaur types that appears in all games: The first Mettaur found in the games has a yellow helmet and doesn't hide under it. The second Mettaur, Mettaur2, has a red helmet and hides under the helmet while another Mettaur is attacking. Mettaur3 is blue and acts like Mettaur2, only having higher stats.

In Mega Man Battle Network 4, there is a Mettaur Village.

In the Mega Man Star Force series there are Mets called "Mettenna". Its name is probably a combination of the words Met and antenna, this may be due to that now it has an antenna. Their appearance and movements are similar to the Mettaurs from the Mega Man Battle Network series. The only difference is that their helmets have a sharp point on the tip which gives off tiny ring-shaped radio waves.

Mets in other games

Mets appeared in Rockman Xover and Pachislot Rockman Ability, and were seen in footage from the cancelled game Rockman Online.

A single Met appears in the first episode, "The Beginning." This particular Met is called Doc. He talks by making funny sounds, yet Dr. Light seems to understand him. Doc goes out into the field with Roll and helps Dr. Light in the lab. He seems to have been a prototype or an alternate version of Eddie, as many items can be produced from his hardhat, even an entire stretcher for Mega Man. In a flashback in the same episode, a Metall-like construction robot can be seen in some blueprints on Dr. Light's table.

Baby Mets and Metall K-1000s are some of the robots that appear briefly attacking an amusement park and forming Samurai Man in the episode "Appearance in Japan".

The Mega Man comic series by Archie Comics feature Mets as well, usually in the service of Dr. Wily. The Metall Potton has a cameo appearance in Mega Man #1, and they are introduced in Mega Man #2.

In the beginning of the crossover, Wily was asking Ra Moon to create a Met with a rice-cooker function, which is later used by him and Dr. Eggman. Several Mets appear operating under Wily and Eggman during the crossover, and in Sonic the Hedgehog Issue 250, the two make a bet to see which of their minions (a Met and a Moto Bug) can cause more damage to Dr. Light. However, the two get into a fight and destroy each other. Dr. Light uses their remains to create a communicator and ask for help, but its signal is very weak, being only detected by Eggman's robots, Orbot reporting it to him.

Also, several Chao from Eggman's world took on Met-like qualities. It is unknown if they are all Chao or if there are robots among them. 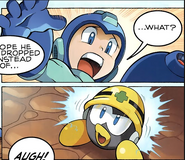 Met with a rice-cooker function.

A Met fighting against a Moto Bug.

Met with a display function in Mega Man #46.

Several Met varieties appear in the Rockman manga series by Shigeto Ikehara. As they are common enemies, most of their appearances are brief, their most prominent appearance being inside New Metropolis in the Rockman 6 manga.

Enemies similar to the Mets.