"Wow! I wish I'd copied Metal Man's power first! That would've made all this a lot easier!"
―Mega Man, Mega Man (Archie Comics)

Metal Blade (メタルブレード, Metaru Burēdo), written as Metal-Blade in some games, is Metal Man's Special Weapon, taking the form of a devastating razor-edged circular saw blade made of Ceratanium[1] that can go through multiple enemies and can be rapidly thrown in eight directions.

The Metal Blade is generally considered to be the strongest weapon from Mega Man 2, as Bubble Man, Flash Man, and even Metal Man himself (in Wily Castle) are weak to this weapon. This is also the secondary weakness of Picopico-kun and Wily Machine 2. Air Man, Crash Man, Quick Man, Mecha Dragon, Guts Tank, Boobeam Trap and Alien are immune to the Metal Blade. It uses barely any energy, consuming 1 energy for every four Metal Blades (a total of, without recharge, 112 blades). Because of this, the general abundance of energy pick-ups, and the fact it can pass through walls, the Metal Blade is often considered the best weapon in the game, even borderline overpowered.

The Doc Robot from Mega Man 3 also used this weapon along with the weapons from the other Robot Masters in Mega Man 2, but the player can't take it from Doc Robot after defeating him in Spark Man's stage. The only difference with the original is that Doc Robot's Metal Blades are orange, but the color is the same for Metal Man's blades in Mega Man: The Wily Wars.

The Metal Blade works in the same way as Mega Man 2. Without recharge, it can throw 76 blades. It is the weakness of Wood Man and Magnet Man. It does no damage against Air Man, Crash Man, Needle Man, Top Man, and Wily Machine II.

Like all weapons from Mega Man 2, the Metal Blade can be used in the Wily Tower mode, being useful against most enemies. The bosses Mega Water S, Iron Ball and the first form of the "Wily Machine" are immune to it.

The Metal Blade is the first weapon obtained by Mega Man, as Metal Man is the game's first boss. It is Bubble Man's and Flash Man's weakness.

The Metal Blade is one of the weapons used by Mega Man in the fighting game Super Smash Bros. for Nintendo 3DS / Wii U as his neutral special attack. Mega Man can throw it in eight directions depending on the direction inputted before throwing it, and it will stick to the ground if thrown to the floor. Mega Man cannot throw another until the current Metal Blade on-screen disappears. It can be picked up and thrown like an item if the opponent catches it before getting hit or if it's stuck to the ground. It deals 3% damage when thrown by the first time and 5% damage if picked up and thrown, usually hitting the opponent twice in both cases.

The Metal Blade can be customized by swapping it out for two variants: Hyper Bomb and Shadow Blade. However, they must be unlocked before it can be swapped out. Like all standard neutral special attacks, this move can be copied by Kirby.

In the debut trailer for Mega Man, Metal Blade acts as his first special weapon of choice after being forced to hold his own, with Mario narrowly dodging one of the Metal Blades (and losing several coins in the process) while Link blocks it with his shield.

In the episode Future Shock, Mega Man copies the Metal Blade from Metal Man after incapacitating him and uses it to defeat Guts Man, by firing it into the ground and sawing a circular hole into the floor around him, causing him to fall into it. Metal Man is also able to wield his Metal Blades as swords à la Blade Man.

In issue 11, Mega Man copies the Metal Blade while facing Metal Man and uses it to take him out (a nod to his weakness). He also uses it to finish off Wily Machine 2 in issue 12, remarking on how he wished he'd copied that power first, also abandoning his initial plan to use every single special weapons he had acquired from Wily's new Robot Masters on the machine upon realizing how effective the Metal Blades were against the machine.

After Metal Man's defeat, Mega Man obtains his first special weapon, the Metal Blade. He uses it in several occasions, with varying usefulness. Mega Man used it for the first time when surrounded by enemies in Wood Man's area, throwing blades in several directions to destroy them and escape. It is used to destroy Wood Man, Bubble Man, and Flash Man, and later Metal Man, Bubble Man, and Flash Man again in Wily's hideout. Mega Man also tries to use it against other bosses, with Crash Man and Quick Man easily dodging the blades and the Mecha Dragon deflecting it.

The Metal Blade is also used by Mega Man in the Mega Man 2 novel, the Rockman World 2 manga, and Rockman 4Koma Dai Koushin. 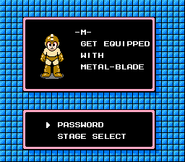 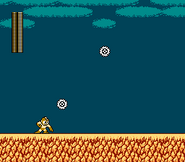 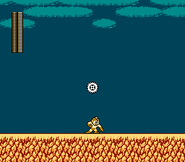 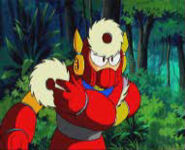