(as a data CD)
Rockman Strategy

Metal Man (メタルマン, Metaruman) is a Robot Master from Mega Man 2. He was the first Robot Master built by Dr. Wily, created specifically for combat for his revenge against Mega Man. Wily based Metal Man's design on Cut Man. His Special Weapon is the Metal Blade, which are large, razor-sharp, circular saw blades made of ceramic titanium that he can throw at a high speed with deadly accuracy. His lightweight design also grants him high agility, but because of a design flaw, Metal Man is particularly vulnerable to Mega Man's Mega Buster and to his own Metal Blades.[1]

Metal Man is most infamous amongst players for being killed with two hits (one hit on the Normal difficulty) from his own weapon when fighting him for the second time in Mega Man 2, which was added as a secret trick to make the game more captivating.[2] Also, a glitch in the Game Boy game Mega Man II can leave Metal Man stuck in the walls, making him harmless and rendering his battle unlosable.[3]

Metal Man is a humanoid robot of average height with red eyes, wearing a black skin tight suit covered by a red armour with yellow accents. His helmet is red and holds a small round saw blade on the forehead and he has yellow knobs with spikes on the sides where his ears are, he also sports a red mask that covers his nose and mouth. His armor is red with a blue trim surrounding a yellow circle on the center of his chest plate and also has two round saw blades where his shoulders meet his body. He also sports a red pelvic plate, red gloves and yellow boots.

Whilst Metal Man is a quick and efficient worker, he possesses a dry wit, having something of a reputation amongst his colleagues for being sarcastic, shrewd and often untrustworthy. Directly relating to his skill with throwing his blades, he enjoys playing with Frisbees in his spare time, but dislikes it when dogs get in his way by catching them. When Dr. Light saw Metal Man for the first time, he remarked that he was "the dentist of the future".[4]

In Mega Man 2, Metal Man stands at the corner of the screen without moving, attacking every four seconds. When he is attacked, he will jump and throw between one to three Metal Blades, depending on how high he jumps. When Mega Man gets close to him, he will jump to the other corner of the screen and throw a single Metal Blade in the middle of the jump. The direction the conveyor belt in his room changes at random. His weakness is his own weapon, Metal Blade, which can defeat him in two hits or less. However, the Metal Blade is only available when fighting against him again in the Wily Castle. The most effective weapon to use against him in the first battle is Quick Boomerang.

Metal Man's strategy from Mega Man 2 was slightly changed. Instead of throwing between one to three Metal Blades at three different jump heights, he now jumps at four different heights, throwing two blades at the three lowest jumps, and 3 blades at the highest one. When Mega Man gets close to him, instead of automatically jumping to the other side of the screen, he will now only jump when attacked or when he is going to attack, throwing a single blade during the jump.

In Mega Man 3, the first Doc Robot in Spark Man's stage copies Metal Man's moves, and before the battle, Metal Man has a cameo appearance as program data copied by Doc Robot. This Doc Robot is weak against Magnet Missiles and Hard Knuckles. There is no conveyor belt in Doc Robot's room.

Metal Man is one of the first four bosses in the Mega Man II game for Game Boy. His strategy is similar to Mega Man 2, but he doesn't move or attack until he is attacked; he will always throws two Metal Blades; and when Mega Man gets near him he will only jump towards him without attacking. The conveyor belt in his room won't change directions.

In this game, Metal Man jumps toward Mega Man instead of going to the other corner of the screen, making him do several wall kicks if Mega Man stays behind him in the corner of the screen. With some luck, it is possible to get him stuck in the wall, making the battle easy.[3]

Sixteen of Dr. Wily's robots from Mega Man 2 and Mega Man 3 are rebuilt by Ra Moon, including Metal Man. Metal Man is the first boss from the game, attacking Mega Man in the Amazon Rainforest.

Metal Man attacks by throwing Metal Blades while jumping back and forth, and sometimes jumping towards Mega Man and slashing him with his blades, instead of throwing them. If the player is defeated, Cut Man will appear to save Mega Man, giving the player another chance to fight against Metal Man. Mega Man defeats Metal Man and obtains the Metal Blade.

Near the end of the game, Dr. Wily's robots (except for Shadow Man) are revived, and Wily orders them to destroy the captured Mega Man. However, Ra Moon attacks the fifteen robots, revealing his true intentions, and when Wily orders the newly created Ra Thor to destroy Ra Moon, he attacks Wily's robots. As Ra Thor prepares to kill Wily, Mega Man stops Ra Thor, and Wily sees that Metal Man and Gemini Man released Mega Man so he can help. After Ra Thor's destruction, Ra Moon reveals he created a robot called New Yellow Devil. Wily orders his robots to attack the robot, but their attacks cause no harm and it knocks down all robots. If the player is defeated, Mega Man can ask the robots to help him, and they will give their remaining energy to Mega Man and shut down. Their bodies are apparently destroyed in the explosion of Ra Moon's temple.

Metal Man is an enemy and recruitable ally, first appearing in Southern Asia with Guts Man to aid Gemini in his attack on the Mine Cave. He also reappears in Wily's laboratory in Saudi Arabia to aid the doctor's Wily Machine in its battle with Mega Man's team. His teammates in that battle are Flame Man, Frost Man, and Spark Man.

While not present in the game, Metal Man's silhouette appeared in Mega Man's reveal trailer for Super Smash Bros. for Nintendo 3DS / Wii U when he selected Metal Blade.

Metal Man appeared as an Advanced Primary Spirit in Super Smash Bros. Ultimate with his artwork from Rockman Complete Works. His Spirit has no special effects. Metal Man's Spirit battle is against three Mega Mans (all with the Metal Blade pallette) with the following conditions:

Translation: Created based on Cut Man. He moves quickly, and the key is in how to avoid his Metal Blade.

Enemies that appears in Metal Man's stage, a stage filled with gears and conveyor belts.

Amount of damage in units that Metal Man receives from each Special Weapon in Mega Man 2.

In Ruby-Spears' Mega Man animated series, Metal Man appears in the episode titled "Future Shock", voiced by Ian James Corlett- noticeably, sharing an actor with Mega Man. Whilst he looks very similar to his original design, Metal Man has red pupil-less eyes, and as in the future part of the episode, he is shown to have small spur-like blades that come out of his heels, which he uses to skate around with at high speed. Metal Man is also able to wield his sawblades like swords, making him a tad similar to Blade Man from Mega Man 10 with both his blades in his hands.

Despite only appearing in one episode, Metal Man was also shown to be one of the more effective Robot Masters in the animated series - at one point trapping Mega Man underneath a pipe and trying to saw his head off. He is ultimately defeated after being hit in midair by a falling pipe that Mega Man had knocked down with a shot, causing him to crash-land and get stuck in the floor. Mega Man then copies his Metal Blade, and uses it to defeat Guts Man.

Metal Man appeared in the episode "The Big Game" from the cartoon Captain N: The Game Master. In this cartoon, Metal Man somewhat resembles an electric tin opener- instead of his standard red and yellow color scheme he is green and silver, has a more angular and metallic appearance, and both of his hands turn into Metal Blade launchers rather than throwing them. He and the other Robot Masters from Mega Man 2, except for Flash Man, play American Football against the main characters.

In the manga Mega Man Megamix, Metal Man is said to be made of lightweight materials, has a sensitive gyroscope installed in his body for enhanced stability, and is able to balance the weight of each part from his body, allowing him to have high mobility and fight unhindered even in unstable terrains. As a result, his durability is lower than some of Wily's other combat robots, and he prefers to evade attacks rather than endure them. His gloves have anti-slip surfaces so that he can grip his blades more easily.

Metal Man first appeared in the story "Orders to Destroy R", where he, Crash Man, and Heat Man appear to aid Air Man when he was outnumbered by Mega Man and four of Dr. Light's robots. Cut Man and the others distract Wily's four robots to let Mega Man go after Wily, but Heat Man chases after him, and the others fight against Light's robots. When Wily's plan fails, they retreat.

Metal Man also appeared in Mega Man Gigamix. He is one of Dr. Wily's robots that help rescue the three doctors and their robots in Dr. Light's Laboratory, which was destroyed by Terra. When Bass takes four Energy Elements and leaves to fight against the Stardroids, Metal Man is one of the robots that inform Wily what happened.

Front, side, and back view of Metal Man.

Metal Man wielding one of his Metal Blades from Super Adventure Rockman. 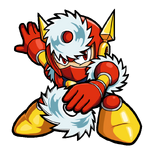 Metal Man as he appears from the LINE Mega Man event.

Metal Man as he appears from the Rockman II manga.

The Wily Bots are quickly taken out.