Mettaur (メットール, Mettōru) is a common virus type in the Mega Man Battle Network series, and the only species to have a constant appearance, while other viruses were replaced or omitted. They wear small hard hats with crosses on them and wield a pick axe, which causes a shock wave when thrust into the ground. In the games, they move up and down the columns they are in, sending shockwaves at the player. While normal Mettaurs stand still while the other Mettaurs present attack, stronger variants hide in their helmets and are impervious to attacks (unless they come out of their helmet or are attacked by an attack that can pierce). In Mega Man Battle Network 3, a family of Mettaurs can be caught and brought to the Virus Breeder, where a special Battle Chip can be obtained from them; upon meeting certain conditions, the omega version can also be caught.

Mettaur: A small black ball with eyes, wearing a yellow hard hat with a green cross on it. Doesn't hide under its helmet.

MettaurEX: Same as Mettaur, but with a light green hard hat and purple cross.

Mettaur2: Same as Mettaur, but with a red-orange hard hat and dark blue cross.

Mettaur2EX: Has a brown hard hat and blue cross.

Mettaur3: Has a blue hard hat and yellow cross. Their shockwaves cracks panels.

RareMettaur: Has a purple hard hat and orange cross.

(Known as Mettool in the first game)

The Mettaur family has basically two types of Battle Chips, one for attack and other for counterattack.

The Battle Chips Shock Wave (ショックウェーブ, Shock Wave also written as Shockwave), Sonic Wave (ソニックウェーブ, Sonic Wave), Dyna Wave (ダイナウェーブ, Dyna Wave), are a non-elemental attack where the user swings a pick to send a shockwave forward. The shockwave can pierce some defenses, but as it moves in the ground, hole panels will stop them.

Big Wave, known as Great Wave (グレートウェーブ, Great Wave) in Japan, is a stronger version that cracks the panels it passes by. It only appears in Mega Man Battle Network 3, being obtained from Mettaur3 if MegaMan has Custom Style.

Met Guard (メットガード, Metto Gādo), also known as Guard, is a Battle Chip that repels an enemy's attack as a shockwave attack, unless attacked by the enemy's body. For example, Guard cannot block Fishy's and Powie's attacks, as they directly hit the player rather than firing a projectile. In the first game there is a Battle Chip named Buster Guard (バスターガード, Buster Guard) that allows the user to use Met Guard several times for 1 turn. In Mega Man Network Transmission, it has two variations from different enemies, the Shield Guard (シールドガード, Shield Guard) dropped by Shield Attacker and Hi-Guard (ハイガード, Hi-Guard) dropped by Sniper Joe.

Met Guard chips are replaced by the Reflector (リフレクメット, RifurekuMetto, roughly "ReflecMet" in Japan) family in the sixth game. It acts the same way, but instead of shockwaves, it releases a fast chain of explosions that aren't stopped by holes.

A Mettaur with an arrow on his helmet leaves the Undernet to ask for help, and when GateMan.EXE takes him back, he accidentally takes MegaMan with him. MegaMan discovers that Mettaurs are under attack and helps them. 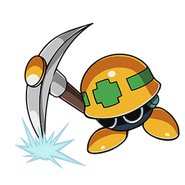 Beast Mettaurs in the anime.

Mettaurs in the manga.
Add a photo to this gallery

Retrieved from "https://megaman.fandom.com/wiki/Mettaur_(virus)?oldid=346325"
Community content is available under CC-BY-SA unless otherwise noted.