Middy (ミディ, Midi) is a character from Mega Man Xtreme. This Reploid was one of the greatest computer geniuses in the world, and managed the Hunter Base's Mother Computer throughout the game to assist the Maverick Hunters solve the current crisis.

Middy, alongside Techno, is revived by Sigma during Worlds Unite as part of his large Reploid army. It is impossible for Techno to survive without Middy, forcing Middy to join the group. 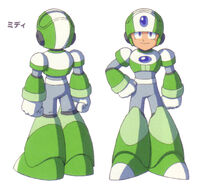