Mino Magnus, known as Mino Magnaxe (ミノ・マグナクス, Mino Magunakusu) in Japan, is one of the Einherjar Eight Warriors in Mega Man Zero 4. He is a Mutos Reploid based on the Minotaur.

Mino tends to be very slow in forming his phrases, resulting in Tech Kraken finishing for him twice, and shows his disapproval of Zero's interruption by trying to destroy him. He guards the Magnetic Zone which was spreading a very high amount of noise to disrupt Area Zero's environmental control system, as well as destroy the Resistance's trailer. When faced again in Ragnarok, he's interrupted by Zero again, and after his defeat, manages to form a sentence telling the Reploid that Raganarok will destroy Area Zero, before perishing again for good.

He uses an axe in battle, but he doesn't make use of it much. His magnetic abilities increase if the weather is in his favor.

He once worked as part of Mass Driver, a mass transportation unit. He seized the opportunity to join Weil's ranks at the promise of limitless energy. He can generate high amounts of power, but expends an equivalent amount of energy to do so. He is a slow talker, and being interrupted during conversations is one of his pet peeves.

Different designs for Mino Magnus were proposed, with different horns or with hands that seem to be combined with his axe.

(Translator and Editor note: Most of Magnus' lines end in "o". They could easily be mistaken for 'roar', but they are plausible, for now)

Mino Magnus appeared in the third chapter of the Rockman Zero manga, where he fights against the new Zero.

Irritated at Craft's defiance in his mission, Weil sends out Magnus to finish Craft's mission instead. While Magnus seems to gain the upper hand, Craft wakes from his consciousness and destroys Magnus with his Beam Cannon, calling him an obstacle in his way, as his fight with Zero isn't over yet. 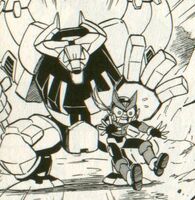 Mino Magnus in the manga.
Add a photo to this gallery

Retrieved from "https://megaman.fandom.com/wiki/Mino_Magnus?oldid=308912"
Community content is available under CC-BY-SA unless otherwise noted.