Flave Yamakawa (山川味太, Yamakawa Ajita) is one of the competitors of the Eagle/Hawk Tournament in Mega Man Battle Network 4. He wants to be a chef and uses an unnamed NormalNavi. Furious that Lan disliked his curry, Flave challenged Lan into a cooking battle before their tournament match. Lan won the battle thanks to a certain cooking master (revealed to be Flave's own father after the tournament match) who wants to teach Flave what cooking really is about.

Jack Bomber (ジャック・ボマー, Jack Bomber) is a FootBomber that participates in the Red Sun/Blue Moon Tournament in Mega Man Battle Network 4 with a NormalNavi to promote his sport.

Koetsu (コーエツ, Kōetsu) is a minor character from Mega Man Battle Network 2 to 6 (named Kiddo in the English version of the second game), Mega Man Battle Chip Challenge and Rockman.EXE 4.5 Real Operation. He is mainly seen helping people in bulletin boards with his technical knowledge, but he also participated in the N1 Grand Prix and Battle Chip GP tournaments with a NormalNavi. He is named after Kōetsu Matsuda, one of the main programmers from the series.[1]

Kosuke (コウスケ, Kousuke) is Tensuke Takumi's grandson, and he appeared in Mega Man Battle Network 4. He has the appearance of a generic NPC boy with cap used in the fourth and fifth games. Kosuke has a rift with his grandfather, failing to understand Tensuke's hobby; it's for a chance to bond with Kosuke that the elder begins to get into Net Battling in the first place.

Kosuke also appeared in episode 43 of MegaMan NT Warrior Axess, where his grandfather learns to NetBattle so he can play with Kosuke. A boy identical to him (except for the lack of TopMan's mark in his shirt) met Moliarty and Mr. Press in episode 13 of Rockman.EXE Beast+.

Mami (マミ, Mami) is the announcer of the Eagle/Hawk Tournament in Mega Man Battle Network 4. Following the tournament's end, she appears in various locations around Castillo park, followed by one of her more intense fans.

Mami also appeared as the announcer from the DenDome NetBattle tournament from Rockman.EXE Phantom of Network.

Nanako (ナナコ, Nanako) is the salesgirl at Higsby's chip shop starting in Mega Man Battle Network 4. Her name is only mentioned in the game if Lan stops by the shop early enough to catch her hiring interview. In the MegaMan NT Warrior anime Shuko Kido has a role similar to her's.

Ozuma Kantoku (オズマ監督, Ozuma Kantoku) is a character from Mega Man Battle Network 4 that appears in Castillo. He is based on Hideo Kojima (小島 秀夫, Hideo Kojima), the creator of the Boktai and Metal Gear video game series.

Patch, known as Raito (来斗, Raito) in Japan, is the son of Lan Hikari and Mayl Sakurai. He appears off-screen in the ending of Mega Man Battle Network 6, in the part that shows what happened to the character 20 years later. Like Lan, he is late to school because he overslept. In Lan's diary from Mega Man Star Force 2, it is revealed Patch has a NetNavi named MegaMan Junior (ロックマン・ジュニア, Rokkuman Junia, Rockman Junior), his programming being taken from the best parts of MegaMan and Roll. Patch is determined to be the greatest NetBattler in the world.

Paulie (ポレポレ, Porepore) is one of the competitors of the Blue Moon/Red Sun tournament in Mega Man Battle Network 4. He uses a Heel Navi called Jammer and is from NetFrica. He invited Lan to his village's WaterGod Festival and subsequently enter the WaterGod Quest. Feeling bitter that Lan and MegaMan unexpectedly won the quest, Paulie hijacked into the WaterGod system to drain his own village's entire water supply. The intention is for MegaMan to fix the system only to be attacked by the viruses he planted in as well. After he lost to Lan in the Blue Moon/Red Sun tournament, the villagers wanted to punish him for his crimes, but Lan stopped the act himself and forgive Paulie for what he did to his own village.

Riki (リキ, Riki) is one of the competitors of the Hawk/Eagle Tournament in Mega Man Battle Network 4. He uses a HeelNavi called Crusher. Despite his scary appearance he is a gentle person who prefers baking more than his position in the mafia.

The Soul Battler Takeshi (ソウルバトラータケシ, Souru Batorā Takeshi) is a NetBattler that only appears in message boards, such as the BBS for the Gargoyle Castle HP in Mega Man Battle Network 5. He is based on a real NetBattler that participate in tournaments from the series and has a mod card with him.[2]

Tetsu is one of the competitors from the Den Battle/City Battle Tournament in Mega Man Battle Network 4. His NetNavi is a HeelNavi.

Yuko (ユウコ, Yuuko) is one of the competitors of the first tournament in Mega Man Battle Network 4. She uses a NormalNavi called Ponta. In reality, the Yuko met in-game is a ghost; she died several years ago. Her presence on Earth has caused a rift, summoning a number of Navi-ghosts back to the Internet. She returns to the afterlife following her defeat, thanking Lan for playing with her.

CookMan.EXE (クックマン, Kukkuman) is the King of YumLand's NetNavi. He, along with his entire country's Navis, were deleted by ShadowMan.EXE and his minions in Mega Man Battle Network 2. He is eventually revived by backup data at the end of the game, seen perfectly alive in the credits, after Yumland's restoration. CookMan is an amazing chef, and once travelled the world collecting recipes.

CopyMan.EXE (コピーマン, Kopīman) is a Navi from Undernet ranked #3 with the ability to adopt the forms of other Navis. He takes on the appearance of GutsMan and fights like him. His true form is unknown.

Gow (ガウ, Gau) is an important program in Mega Man Battle Network 5 that, in the real world, resembles a dog. 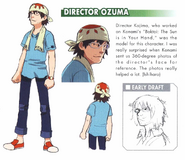 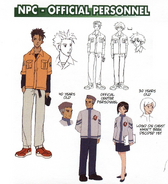 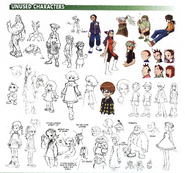 Concept art of Unused Characters.
Add a photo to this gallery

Retrieved from "https://megaman.fandom.com/wiki/Minor_Mega_Man_Battle_Network_characters?oldid=291233"
Community content is available under CC-BY-SA unless otherwise noted.