Mirror Buster (ミラーバスター, Mirā Basutā) is Enker's Special Weapon that first appears in Mega Man: Dr. Wily's Revenge. When used by Mega Man, an energy shield is created in front of him while the attack button is held down. The shield itself does not cause damage, but it can absorb an enemy's shots and reflect it back at the one who shot it in the same direction. This is the only weapon that can hit the Wily Machine's final form in Dr. Wily's Revenge. It can also pierce Sniper Joe's shield, causing damage.

The Mirror Buster can also be obtained in Mega Man 10, Mega Man being the only playable character able to use it. The size of the Mirror Buster's projectile has increased, but the reflected attack only moves straight forward regardless of the direction the attack came from. This weapon is very effective against Strike Man, Flame Man's data in the Weapons Archive, and Punk.

When Mirror Buster is used by Enker, he raises his spear to pull any kind of attack to it, denying their damage but not reflecting them. His spear also pulls Carry, Rush and Tango. Afterwards, regardless if he is attacked or not, Enker points his spear forward and releases a projectile (the same as Mega Man's Mirror Buster). The exception is the Mega Buster, which will still damage Enker while absorbing the bullets, but will also increase the power, speed and range of his projectile depending of how many bullets are absorbed. The amount required varies between games. 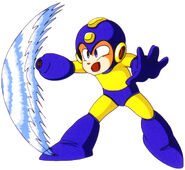