Mitch Shepar, known as Ikuta Michimori (育田 道徳, Ikuta Michinori) in Japan, is an idealistic and friendly teacher appearing in the Mega Man Star Force games and anime. He has seven children of his own and sees his students as if they were his own kids. He often tells stories instead of teaching by the books, claiming that he doesn't want to raise kids who can only study.

In the first game, Mitch talks with Geo's mother, Hope about Geo returning to school. He is later confronted by the school's principal, who tells him he will lose his job as a teacher for not using the Study Wave (an EM wave that stimulates brain activity). Mitch breaks down due to stress and meets Libra, who convinces him that he must abandon his ideals in order to succeed. Together with the FM-ian, his personality shifts to extremely strict, and he puts his class into a trance of non-stop studying using the Study Wave. After being defeated by Mega Man and seeing his students' concern for his well being, Shepar realizes that he was wrong and drives Libra from his heart.

Mitch reappears in Mega Man Star Force 3 as the teacher of the series, whose role can somewhat be compared to that of Ms. Mari's from the Mega Man Battle Network series.

Mitch Shepar lectures at Echo Ridge Laboratory. When Libra (an FM-ian who often weighs decisions in an "A or B" scenario before taking action) becomes injured in a battle against Mega Man, he takes control of Shepar's body to hide while he recovers. Once Libra is able to take the form of W Shepar, he hosts a game show under the name Mr. Lovely that Sonia is invited to participate in. He later ends up being deleted by Gemini Spark in order to refill the Andromeda Key. 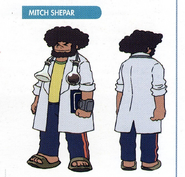