A Mobile Terminal (携帯端末/けいたいたんまつ, Keitai Tanmatsu) is a small electronic portable device that plays an important role in the Mega Man Star Force series. It is the evolution of the PErsonal Terminal from the Mega Man Battle Network series. Unlike its predecessor, they are not unified under a single title and each have distinct names from each other.

Three different terminals appeared in the Mega Man Star Force series. In this era the abbreviation PET is no longer used, and the use of EM Waves made the term internet obsolete,[1] although computers and e-mails still exist. It uses Battle Cards instead of Battle Chips, which were created three years before the game to help people deal with EM Viruses.

A constant feature with these devices is the BrotherBand system that allows "Brothers" to see each other's personal information to build trust. However with new iteration, each person's Brother Bands are cut and new ones must be formed.

The Transer is the mobile terminal used in the first Mega Man Star Force game, several years after the Mega Man Battle Network series. As it can be used to directly attack viruses, NetNavis are no longer stored in terminals to help, but a person can have multiple Navis with different skills by using the Card Force. Instead of the colors being individualized to the person, the color determined to the Satellite Admin they are connected to (Pegasus, Leo, or Dragon).

The Transer toy shows it off as two parts, a flip open device similar to the Nintendo DS, and a giant holder that straps to their user's left arm. 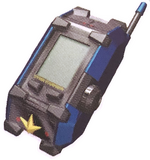 A new terminal from Mega Man Star Force 2. This device allows the user to physicalize digital items and characters as Matter Wave. By using the phrase "Browse!", it will call an Air Display, which materializes a holographic window. Its design and the new Matter Wave technology are based on ancient terminals from Mu discovered by Doctor Vega. AMAKEN also helped in its creation, adding the Link Power feature.

In the Shooting Star Rockman Tribe anime, the Star Carrier and Matter Wave function were created by Tom Dubius. The toy can take off the "glass" cover and swap the mechanical tiles between other versions.

The successor of the Star Carrier that appeared in Mega Man Star Force 3. Instead of a traditional screen, it completely utilizes holograms for visuals. Its features are improved and is able to hold a Wizard, which act much like NetNavis. Like Navis and Matter Waves from before, Wizards can be easily exchanged, done by giving another user their Wizard Adapter. It seems to also support EM Wave Change, as those who try will then be registered and regulated under Project TC.

In the first Mega Man Star Force game and the first season of the Mega Man Star Force anime, Sonia Strumm's guitar is shown to work similar to a Transer, with her opting to use it rather than wear a Transer. In the game, when other character raise up their Transer to signal their BrotherBand to Geo, Sonia raises up her guitar instead. In the anime, Sonia uses it to store and talk to Lyra similarly to how Geo stores and talks to Omega-Xis on his Transer.

In the first season of the Mega Man Star Force anime, the Wave Scanner can used as an alternative to the Transer, although the Transer is still used the most by characters. It carries over all of its functions, and is shown to also be a music player, complete with a jack to plug in earphones.