"I am the fire that brings heat to all life, Flamma Wies."
—Model F

Model F is a Biometal from the Mega Man ZX series containing the essence of Fighting Fefnir. Model F's Chosen One can Megamerge with it to become the Flame Mega Man.

Model F was stolen by Serpent and split into two halves to create the Pseudoroids Fistleo the Predatoroid and Flammole the Moleroid. Once attained by Vent/Aile, he/she gains access to Model F's abilities by Double Megamerging it with Model X to create Model FX.

His password is Flamma Wies, a corruption of 'Flamma Vis', which means 'Power of Flame' in Latin.

Biometal Model F is used against its will by a new Chosen One by the name of Atlas. Her manifestation of Model F bears closer resemblance to Fefnir, with the helmet ornaments mounted on the front instead of the back. In Ashe's story, Atlas can use this Biometal to lay bombs.

Model F in Biometal form possesses a very blocky form with an orange coloration, two yellow large protrusions running perpendicular of one another that cover the front and back and a guard that covers the jewel in the center. In Megamerged form, it gives the user orange colored armor with a head guard similar to the one found on the Biometal and two upward forward-facing horns, resembling the lower canines of a dragon. When Double Megamerged with Model X, the helmet becomes more streamlined and the horns are placed on the back with two smaller ones on the lower portion, giving it the appearance of a horned dragon's crest. The gauntlets in both forms are also given a more blocky appearance in order to match the shape of the hand cannons.

Model FX makes use of the Knuckle Busters (Nichou) based on Fefnir's arm cannons Sodom and Gammorah, has fire element attacks, and is good in both long-ranged and melee combat. The Knuckle Busters can fire upwards as well as sideways. Attacks and abilities specific to this Model include the Megaton Crush, which only needs a half-charge, a large fireball attack, and Ground Break similar to the charged version of the Fire Wave used by X in the first X game. Ground Break is needed to get some blocks that are in the way to certain areas. Model F's Buster Edit skill allows an individual path to be set for both Knuckle Busters' shots. When not in used, the Nichou are stored in a special socket attached to the jacket with the FX version bearing a closer resemblance to how Fefnir had his stored Sodom and Gammorah. 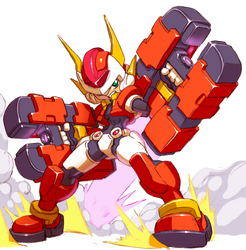 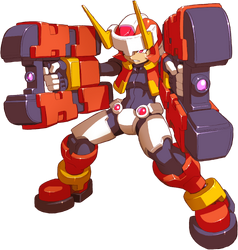 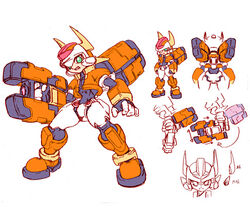 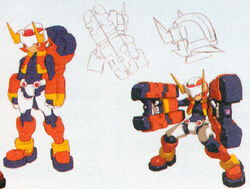 Concept art of Atlas using Model F.
Add a photo to this gallery

Retrieved from "https://megaman.fandom.com/wiki/Model_F?oldid=314940"
Community content is available under CC-BY-SA unless otherwise noted.