"I am the wind that blows through the sky, Ventus Airus."
—Model H

Model H is a Biometal from the Mega Man ZX series containing the essence of Sage Harpuia. Model H's Chosen One can Megamerge with it to become the Wind Mega Man.

Model H was stolen by Serpent and split into two halves, used to create the Pseudoroids Hivolt the Raptoroid and Hurricaune the Wolveroid. Once acquired by Vent/Aile, he/she gains access to Model H's abilities by Double Megamerging it with Model X to create Model HX.

His password is Ventus Airus, a corruption of 'Ventus Aerius', Latin for 'Wind belonging to Air'.

Model H is used against its will by a new Chosen One by the name of Aeolus (a name tribute to the Greek god of wind). This manifestation of Model H appears much more sinister than that of Model HX, with its wing jets and helmet ornaments bearing a distinct bat-like motif. However, Aeolus does exhibit many of Harpuia's personality traits, especially his dedication to perfection, save for the lack of compassion and honor.

Biometal Model H is shaped into an isosceles trapezoid with a dent in the middle, giving it a pseudo H shape. Its color scheme consists of varying shades of green and its face is located at the bottom with a gold round lining at the top where the red crystal lies. When Megamerged alone, the user dons green armor which features a winged helmet akin to a bat and a pair of wings whose energy constructs form a similar shape. When Double Megamerged, the armor gains a more vibrant green hue matching the Biometal's color. Both armor's and helmet's wings increase and length and can open up to operate in conjunction together as powerful boosters whose energy constructs are more feather-like.

Like Harpuia, Model H possesses two energy blades and has limited control over lightning and wind. 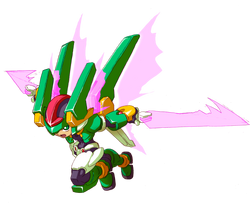 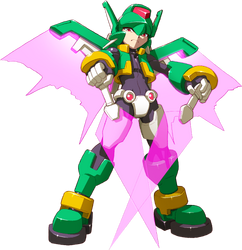 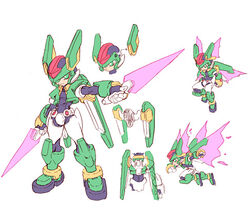 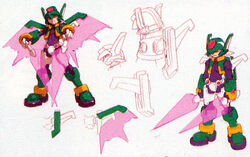 Concept art of Aeolus using Model H.
Add a photo to this gallery
Retrieved from "https://megaman.fandom.com/wiki/Model_H?oldid=322870"
Community content is available under CC-BY-SA unless otherwise noted.