"I am the water that flows across the land, Glacius Passio."
—Model L

Model L is a Biometal from the Mega Man ZX series containing the essence of Fairy Leviathan. Model L's Chosen One can Megamerge with it to become the Ice Mega Man.

Model L was stolen by Serpent and split into two halves to create the Pseudoroids Lurerre the Abysroid and Leganchor the Gelroid for protection. After being acquired by Vent/Aile, Model L can merge with Model X to make Model LX.

Model L's password is Glacius Passio, which is Latin for 'Icy Passion'.

Model L is untamed without the power of Model X and has a new owner by the name of Thetis. The young Thetis shares Leviathan's playfulness, but with a childlike trait to it, and Model L's color scheme bears a vague resemblance to X, a play on X's sometimes childlike innocence. When playing as Ashe, Thetis can use this Biometal to create a spiky orb of ice and then shatter it into shrapnel. While playing as Grey, the charge attack is an ice dragon that homes in on nearby enemies while passing through walls.

Biometal Model L appears in the shape of a kite-like shape with a single protrusion pointing up. It has a blue and white color scheme similar to Biometal X with the addition of gold accents and a different shade of blue. When Megamerged alone, the user gains bright blue armor. The helmet features fins on the side and a large booster resembling a ponytail. When Double Megamerged, the helmet gains twin dorsal fin engines on either side with an additional one behind the helmet. Uniquely the grieves gain a second lighter color.

This Model has ice elemental attacks, and its weapon is a dual-bladed halberd. Attacks and abilities specific to this Model include Hyouruu, an attack in which an ice dragon is summoned to attack an enemy, Water Dash, Swim, and Item Scanning. The Item Scan skill allows the user to detect items upon a map, in which a Cyber Elf icon navigates to a nearby item's position. Player can also avoid the slippery effect when moving on ice if activated Model L/LX.

The difference between Model L and LX is that model LX has two head water boosters while L has one and has a shark like appearance, and LX shoots out ice platforms similar to that of the charged version of the Shotgun Ice X used. 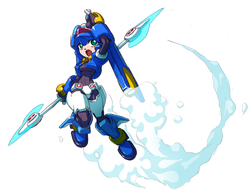 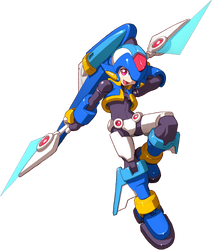 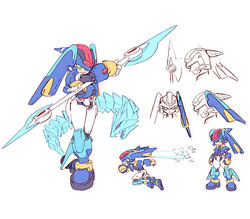 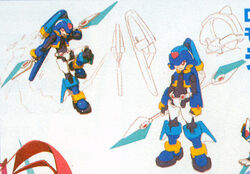 Concept art of Thetis using Model L.
Add a photo to this gallery

Retrieved from "https://megaman.fandom.com/wiki/Model_L?oldid=268797"
Community content is available under CC-BY-SA unless otherwise noted.