"I am the shadow that never leaves the side of justice, Umbra Profess."
—Model P

Model P is a Biometal from the Mega Man ZX series containing the essence of Hidden Phantom. Model P's Chosen One can Megamerge with it to become the Shadow Mega Man.

Model P is one of the Biometals stolen by Serpent and split into two halves to create the Pseudoroids Purprill the Mandroid and Protectos the Goreroid for protection. After being acquired by Vent/Aile, Model P can be merged with Model X to form Model PX.

His password is Umbra Profess, roughly Latin for 'Shadow Art' or "Believe in the Shadow".

Biometal Model P has a new owner, being used by the mysterious character, Siarnaq, without being combined with Model X. Like Phantom, Siarnaq's devotion to carry out orders seem to be second to none, but just like Aeolus, he lacks compassion. Siarnaq also has several unique sprites that he doesn't share with his fellow Mega Men, such as a hunched-over stance and altered running and walking stances much like a ninja's, which further attributes to his cold and unapproachable nature.

Model P has a mostly purple coloration and a hexagonal shape, parting at the top middle and its jewel is roughly half as long as its body with the face showing a white visor, similar to a mask. When Megamerged alone, it gains the standard Mega Man armor with a purple coloration. The helmet features a white face guard that extends beyond the helmet. It also generates a tattered red cloth as well. The gauntlets are also different, being colored wholly yellow instead and can open up to allow the user to operate its energy weapons. When Double Megamerged with Model X, the face guard becomes a visor, reminiscent of Phantom and the cloth becomes more complete.

Model P is the Biometal for Hidden Phantom and can be combined with Model X to create Model PX. This Model's main attack is a straight, endless barrage of kunai which can be summoned by repeatedly pressing the attack button. Its charged attack consists of throwing an oversized shuriken which will return to Vent/Aile after reaching a certain distance. Also, pressing the Up button when launching a charged attack will summon a barrier. If overdrive is activated, Model PX gains a boost in power as well as a shadow-dash which can phase through enemies (bosses, machines,etc.) and projectiles without taking damage.

Model PX's special ability is Radar Scope. While playing as Model PX, the Nintendo DS' bottom screen will display a map of the player's surroundings with enemies and targets marked with exclamation marks. This model also has the ability to see further in dark areas like certain halls in Area I.

Model P reappears, this time as the biometal for Siarnaq, who uses it without the aid of Model X. The Mega Men Model A can copy Siarnaq's DNA after defeating him in battle and A-Trans into Model P. Grey receives the shuriken throw as his charged attack while Ashe gets the barrier.

The Radar Scope makes a return, as well as the ability to hang on ceilings. The kunai barrage also arc slighty upward. Additionally, the stylus can now be used to shoot enemies on the Nintendo DS' bottom screen by tapping the exclamation marks. 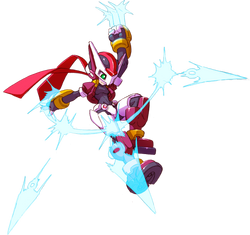 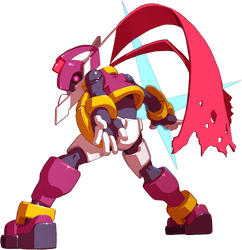 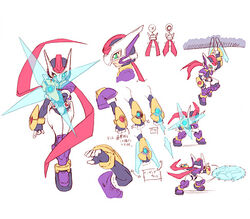 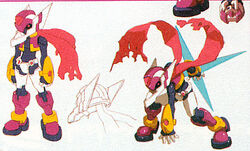 Concept art of Siarnaq using Model P.
Add a photo to this gallery

Retrieved from "https://megaman.fandom.com/wiki/Model_P?oldid=352640"
Community content is available under CC-BY-SA unless otherwise noted.