"I am the light that illuminates all possibilities, Lumine Infinitus."
—Model X

Model X (モデルX, Moderu Ekkusu), the Blue Mega Man, is a Biometal from the Mega Man ZX series. It is the Biomatch of Vent /Aile and contains the soul of X. This Biometal grants the user an X-Buster, which can charge and release blasts of energy on three levels identical to X's upgraded buster in Mega Man X2, able to fire two charged shots in a row when fully charged. Model X can also be used to Double Megamerge (ダブルロックオン, Double R.O.C.K. On) with other Biometals, allowing Vent/Aile to utilize the Model ZX, HX, FX, LX, PX and OX forms.

Model X in Biometal form takes on a blocky triangular shape with a blue color scheme and a large red crystal, similar to X.

In Megamerged form, the user dons armor very similar to X with gold highlights included and a white trim on the helmet as opposed to the familiar light blue. The jacket armor remains closed. Whenever it Double Megamerges with another Biometal, the armor will change to the corresponding color and the jacket will open up. In addition, the jewel on the helmet, regardless of which form, will shape into an arrow-like design that stretches to the top of the structure.

When Megamerged, the user gains the use of the X-Buster, a powerful projectile weapon that fires energy shots. It can also be charged up to three levels, the first being a slightly stronger shot, the second level being a fully charged shot that has smaller energy torrents surrounding the main energy shot to increase range and the last level shoots two fully charged shots in succession. Its special ability is Double Megamerge. Due to its compatibility with the other four Guardian Biometals, it has the ability to fuse with the other Biometals to enhance their fighting powers.

While Model X is only available at the beginning of Mega Man ZX, it can be used normally when the game is cleared with both Vent and Aile in Normal difficulty.

Model X is obtained by Vent/Aile in the beginning of the Mega Man ZX game after a meeting with Prairie and a subsequent surprise attack by Mavericks, with a Biomatch created by their sense of justice. From then on, the Biometal is personally used by the duo before they inherit Model Z, gaining the ability to fuse into the Model ZX Mega Man.

Its password for the gate inside Area M is Lumine Infinitus (Infinite Light), referring to X's "Limitless Potential".

In Mega Man ZX Advent, Vent/Aile still has Model X and Model Z, fighting as the Model ZX Mega Man to end the Game of Destiny by destroying Model Ws. Inside Ouroboros, Model Z stays behind to stop the other Biometals and allow Vent/Aile and Model X to reach Ashe/Grey and Model A. 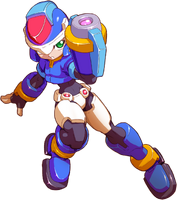 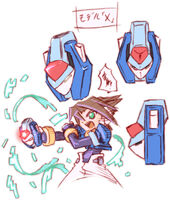 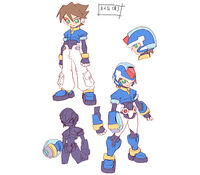