"I am the courage that fights for beliefs, Fortitude Creed."
—Model Z

Model Z (モデルZ, Moderu Zetto), the Red Mega Man, is a Biometal from the Mega Man ZX series. It is the Biomatch to Girouette and contains the essence of Zero.

"It's your decision. You alone must make it. Do you have the will to fight?"
—Model Z, Mega Man ZX

Model Z is a black and red Biometal shaped after a hexagon. It is fairly similar to Model X, though the front resembles Zero's helmet from the Mega Man Zero series. The chin has a long white ridge running across the Biometal's lower half.

When merged with its Biomatch, Girouette, Model Z outfits the host with primarily red armor similar to Model X; however, it lacks a helmet, instead covering the user's eyes with an angular visor. The Chosen One is equipped with the Z-Saber, specializing in close range. Attacks used by Girouette in this form are based on Zero's attacks, including a jump slash, a dash slash, a charged slash, a wide range attack, and an unique "Z" shaped move. Model Z is never shown to have any type of Buster, excluding Model ZX, which may be due to Model X's influence or gameplay design.

Model Z retains Zero's personality traits. Like in the past, he never loses his composure even in dire situations and is also willing to put himself at risk for the sake of those he trusts. He seems to have a good relationship with Girouette, who calls Model Z his partner. Model Z later comments that Giro is a good man.

After Serpent betrayed the Guardians and seized Model W, the first commander of the Guardians created Model Z along with five other Biometals to fight the threat.[1] Made from the soul of a legendary hero and the data gathered from Model W, the Biometal was given one of six passwords required to unlock the seal to the Model W core before the memories following his creation were erased.

Model Z eventually came into possession of Girouette, a Guardian who received orders from the first commander to protect the victims of Maverick raids before her disappearance. However, her successor Prairie was unable to understand this command until Model Z performed Megamerge with Giro, revealing the fact that only the survivors could be chosen by the Biometals.

His password is Fortitude Creed, which means: "Brotherhood of Bravery."

When Model X is discovered by a Guardian unit, Giro, now living as owner of his own transporter company is commissioned by Prairie to deliver the Biometal. Accompanied by either Vent or Aile, Girouette is separated from his protégé by a Maverick attack as they head to the rendezvous point. Giro is able to repel the Mavericks as Mega Man Model Z, and eventually reunites with Vent/Aile, who became Model X's Chosen One.

During a Maverick attack on Area D, both Giro and Model Z fall to the influence of Serpent, who forces them to fight Vent/Aile. As Giro struggles to fight the influence, he suffers a lethal blow from Serpent, only surviving due to Model Z serving as life support. However, the passwords of Model X and Model Z are stolen by Prometheus and Pandora, leaving Giro and Vent/Aile at the mercy of the Mavericks. Model Z is convinced by Giro to cancel the transformation and protect Vent/Aile instead. Giro passes away, but Model Z is able to save Vent/Aile's life by performing a Double Megamerge with Model X, turning Vent/Aile into Mega Man Model ZX.

Model Z's power proves instrumental in Vent/Aile's fight against Serpent's forces, assisting in Vent/Aile's recovery of the Biometals Model H, Model F, Model L and Model P from Serpent's Pseudoroids. It also aids in the unlocking the seal to the Model W core, but Serpent takes the Model W and immediately starts Maverick attacks across the country to feed the core. The Model X Chosen One takes the fight to Slither Inc.'s head office, only to find out that the Blue Mega Man's hatred for Serpent was the final key to Model W's awakening. However, Model Z and the other Biometals, encourage his Chosen One to not give up and fight with bravery. Motivated by the words of all the Biometals, Vent/Aile defeats Serpent and is removed from the collapsing building by the Biometals. In the end, Model Z shares some final advice to Vent/Aile, telling the Model X Chosen One to face his/her destiny and carve a new future.

Four years and eight months later,[2] only Model X and Model Z remain with Vent/Aile as the other four Biometals were stolen by Prometheus and Pandora, who gave them to evil Biomatches. However, they only discover what happened to the Biometals when the fact is revealed by either Grey or Ashe, the new Mega Man Model A after clearing up a misunderstanding over a local Model W fragment. During the battle, Model Z also warns Vent/Aile (depending on who the player is playing as) that Model A was emitting data (referring to the ciphers being unlocked). Model Z explains that they were following the stolen Biometals, which is how they found Grey/Ashe and the Model W. When Master Albert finishes the creation of Ouroboros, Vent/Aile joins forces with the Model A Chosen One to stop Albert, but Vent/Aile stops to fight Aeolus, Atlas, Thetis and Siarnaq while Grey/Ashe faces Albert.

After Albert is defeated and Ouroboros starts to collapse, Model Z spontaneously separates from Vent/Aile and Model X to hold back the other Mega Men while the Model X Chosen One rescues Grey/Ashe. Promising that he won't die that day, Model Z tells the four Chosen Ones that he knows their own Biometals more than they do, causing the four to be suddenly immobilized shortly before the explosion of Ouroboros. Although it is later revealed that the four Mega Men survived the event, Model Z's fate remains unknown. 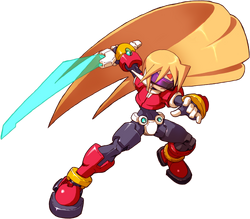 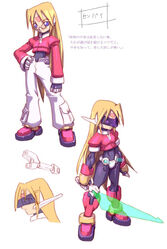 Concept art of Giro using Model Z (along with his normal form).
Add a photo to this gallery

Retrieved from "https://megaman.fandom.com/wiki/Model_Z?oldid=337174"
Community content is available under CC-BY-SA unless otherwise noted.