Mole (モール, Mōru) is a digging enemy from the Mega Man series that comes in great quantity from the floors and ceilings. Originally released as a household borer that was easy to obtain, Dr. Wily purchased a large amount and converted them into attack drills.[1] They appear in Metal Man's stage and in the final stages from Mega Man 2, Metal Man's stage in Mega Man II, the final stages of Mega Man: Dr. Wily's Revenge, the Wily Tower in Mega Man: The Wily Wars, and the first stage of Mega Man & Bass.

Amount of shots/hits from Special Weapons it takes to destroy a Mole.

Mega Man 10
Molmole (モルモール, Morumōru) is an improved Mole from Mega Man 10 that appears in the final stage and Special Stage 1. Unlike its previous versions, it makes small sparks appear from the ground it digs.

A Robot Similar to Mole, but with arms, appears in a flashback in the first episode of the Mega Man Cartoon amongst Dr. Light's plans for industrial Robots.

Mole in the Rockman World manga. 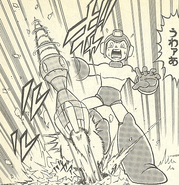 Mole in the Rockman & Forte manga.

Mole in Dr. Light's Plans in the Cartoon show. 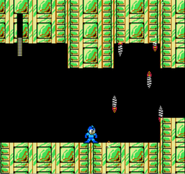