Monking (モンキング, Monkingu), also known as Mecha Monkey in the Mega Man 2 instruction manual for the U.S., is a robot ape enemy from Wood Man's stage in Mega Man 2 that was originally created to be used in forests. It always appears from the bottom of the screen, swings underneath the platform for a few seconds, and then leaps onto the platform to try to pounce Mega Man.

Amount of shots/hits from Special Weapons it takes to destroy a Monking.

Returning Monking (帰ってきたモンキング, Kaettekita Monkingu) is a monkey enemy that hangs from ceilings and jumps when an enemy gets close to it. It is an upgrade of the Mecha Monkey, which is now lighter and faster. They appear in Hard Man's stage in Mega Man 3 and Mega Man II (as well as the last Wily Stage in the latter).

They also appear in the 3rd Wily Tower Stage in Mega Man: The Wily Wars.

Amount of shots/hits from Special Weapons it takes to destroy a Returning Monking.

Monkikki (モンキッキ, Monkikki) is a modified Monking from Mega Man V that jumps and throws banana-shaped projectiles. It appears in the stages of Mars and Uranus.

Monkikki's name is a play of "monkey" and "ukikki" ("eek", the sound a monkey makes).

Monking A is a modified Monking that helps the Atetemino Proto in Mega Man & Bass. It attacks by throwing balls from the top of the room and mocks the player, though it can be tricked into throwing these balls at the holographic copies created by the Copy Vision.

Monking had brief appearances in the manga Mega Man Megamix and the cartoon Captain N: The Game Master.

Returning Monking appears in Mega Man #44 informing Hard Man that Mega Man arrived in his base. Hard Man later thanks the robot and it returns to patrolling the area. 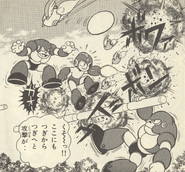 Front, side, and back view of Returning Monking.

Returning Monking informing Hard Man that Mega Man is nearby. 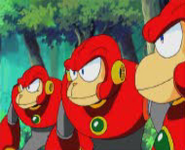 Returning Monkings in Super Adventure Rockman.
Add a photo to this gallery
Retrieved from "https://megaman.fandom.com/wiki/Monking?oldid=337551"
Community content is available under CC-BY-SA unless otherwise noted.