Fallen Angel of the Island of Dreams

Morph Moth, known in Japan as Metamor Mothmeanos (メタモル・モスミーノス, Metamoru Mosumīnosu), is a Maverick in Mega Man X2 who is based off a bagworm moth. An unusual Reploid of unknown background, he has the ability to transform/evolve his body by absorbing scrap from other Reploids, robots, and machinery. Under Sigma's orders he occupied the Robot Junkyard, using the scrap materials there to resurrect fallen Reploids. When the player first meets him, he looks like a strange dangling organism with eyes, which is actually a larva/cocoon. He can move around and drop junk on the player, and even do a spiraling attack with it. His weakness is Speed Burner.

When the battle begins, Morph Moth (in this form) will swing back and forth like a pendulum. If he swings hard enough he'll drop debris. When he swings his last swing he'll fall to the ground and spin on the floor, becoming invincible. After that he'll stop in the center of the room (near or exact) and will absorb debris into himself clockwise or counter-clockwise. For this battle, try to avoid taking damage as much as possible. When he spins on the floor, get off the floor. When he absorbs junk, try to run and dodge in the direction he's absorbing the junk. You can either let him grow into his true form or you can pelt him with X Buster Shots or the Speed Burner. Either way he'll reveal his true form and the real battle will begin.

When Morph Moth loses more than half his energy (below ten bars of health) or the battle drags out for a long time and thus allowing Moth to fully develop (his cocoon will grow progressively larger), the ceiling gives away, and he reveals his true self. In this state, Moth will fly around the room dropping sparkling dust/pollen and will occasionally fire a colorful laser beam from his hands. His pollen attack and himself are easily avoided by standing near a wall. If he stops above you and fires a laser, simply dash to the other side to avoid it. Just like his previous form, attack him with charged X-Buster shots or Speed Burner, and he'll go down without a problem.

In the carddas, Mega Mission 3, he is revived as "Metamor Mothmeanos HL", and attacks the Maverick Hunter base with other three Mavericks disguised as a recruit Hunter under the alias, "Grün Metamo". 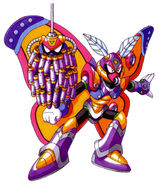 Alternate artwork of Morph Moth displaying both of his forms.

Metamor Mothmeanos HL from Mega Mission 3.
Add a photo to this gallery

2zg7y3c.gif
Add a photo to this gallery

Retrieved from "https://megaman.fandom.com/wiki/Morph_Moth?oldid=178219"
Community content is available under CC-BY-SA unless otherwise noted.