Mousubeil (マウスベール, Mausubēru) is a small robot mouse enemy introduced in Mega Man 5 that was created by Dr. Wily to search for Mega Man. They slide low on the ground, making it difficult to hit them, but a charged shot or Special Weapons like Napalm Bomb, Crystal Eye, and Gyro Attack can reach them if Mega Man is on the same ground level as them, or attack from a different ground level if possible. In Mega Man 5 they appear in Stone Man's, Charge Man's and Crystal Man's stages, and in the second Wily Castle stage. They appear in Charge Man's stage in Mega Man IV and Stone Man's stage in the Game Gear Mega Man game.

Amount of shots/hits from Special Weapons it takes to destroy a Mousubeil.

Mousubeil appears in the first episode from Mega Man: Upon a Star, being one of the robots that attacks an amusement park in Japan and combines into Samurai Man. 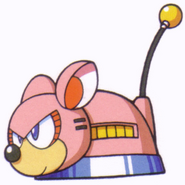