Mr. Famous, known as Eguchi Meijin (江口名人, Eguchi Meijin) in Japan, is a character from the Mega Man Battle Network series. He is a famous scientist that worked alongside Yuichiro Hikari on several occasions. He is recognized for his signature glasses, lab coat, and numbered shirt.

He is the creator of several NetNavis, and uses four in the games:

Except for Punk, who is based on a classic series Mega Man Killer, his other Navis were created by fans in a contest sponsored by Capcom.

Mr. Famous doesn't have much storyline significance and is usually an optional boss. He sometimes gives useful hints.

Mr. Famous is a skilled scientist who works at SciLab, but in the first season, he went around helping people. He presents himself as the famous Mr. Famous, but many characters remark that they have never heard of him, disclaiming his supposed fame. Mr. Famous first helps Mr. Match when TorchMan is deleted and offers to use TorchMan's data to complete HeatMan.EXE, a NetNavi, he created. Mr. Match initially refuses, but agrees to avenge TorchMan.

Later, while MegaMan is in space, fighting against PlanetMan.EXE, he gives Lan the Extra Code, which gives MegaMan the Aqua Custom Style which won him the battle.

After MegaMan NT Warrior, he plays a supporting role at SciLab and guides Lan, Chaud, and the Cross Fusion Members in defeating their various enemies.

In Rockman.EXE Stream episode 11, he is shown to enjoy collecting small figurines. Of his collection, there are a total of five Rockman.EXE figures and figures of other Navis including: Blues, Roll, Rush, Aquaman, Iceman, Gutsman, and Numberman. There are also some virus figures which include Billy (the thunder virus), three Mettaurs (two small and one extra large), an extra large Swordy2, a Quake, a Jelly, and several others. The rest of his collection includes different types of aircraft and an assortment of various animals.

In Rockman.EXE Beast, it is revealed that Makoto Aoki was his former girlfriend. It it shown that Famous still has feelings for Makoto, as he gets embarrassed when Makoto sticks too close to him.

In the manga, Mr. Famous is in a group of skilled NetBattlers, and tests Lan and Chaud to see if they qualify for joining their group against the Dark energy. He uses a point system to tell how well they do and Punk.EXE as his NetNavi.

When DesertMan.EXE attacks the base, Mr. Famous and Punk let themselves become captured so Lan and MegaMan can defeat him. He is later put into a hospital, where Serenade.EXE visits Mr. Famous's mind; it appears the two have met before.

Mr. Famous is a S Rank Official NetBattler. After the fall of the WWW, Mr. Famous, Masa, and Tamako saved Lan from the collapsing WWW Research Facility, and they warned Chaud about a new threat, Alpha. After MegaMan and GateMan destroy the viruses in the hospital Lan was recovering, Mr. Famous invites Lan to participate in a test to become a Private NetBattler, which he passes. 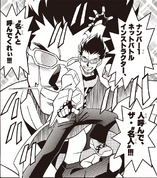 Retrieved from "https://megaman.fandom.com/wiki/Mr._Famous?oldid=326580"
Community content is available under CC-BY-SA unless otherwise noted.