Mr. Famous' apprentice (名人見習い, Meijin minarai) is a minor character from Mega Man Battle Network 3 White that appears in Yoka, where he gives several game hints. Mr. Famous appears in his place in the Blue version of the game.

Famous’ apprentice has a brief appearance in the beginning of the film, where he operates FootMan.EXE and loses a NetBattle against Netto Hikari and Rockman.EXE.

Mr. Famous' apprentice in Rockman.EXE: Hikari to Yami no Program 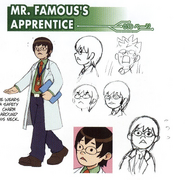 Mr. Famous’ Apprentice’s Progess PET from the movie among several other character’s.
Add a photo to this gallery

Retrieved from "https://megaman.fandom.com/wiki/Mr._Famous%27_apprentice?oldid=297565"
Community content is available under CC-BY-SA unless otherwise noted.