Mr. Press (ミスタープレス, Misutā Puresu) is a character from the Mega Man Battle Network series. His NetNavi is DustMan.EXE and he is an avid recycler.

Mr. Press participates in a Navi Mascot competition to promote the use of recycling and helps Lan and MegaMan.EXE when they are attacked by HeelNavis. The HeelNavis try to unleash MegaMan's Cybeast when Mr. Press with DustMan arrive. DustMan uses Dust Break and defeats them. Afterward, Mr. Press introduces himself and takes off to look for the Moonstone. He loses the competition but still champions recycling. Then he gives lessons in Seaside Town to gain Dust Cross which involve using DustMan to recycle and then battling him. After he is defeated, Mr. Press gives Dust Cross and can be rebattled for the DustMan Mega Chip's.

Mr. Press is friends with Moliarty and lives in Beyondard. They meet with Chaud and Mayl after they stumble into a hole they dug. Mr. Press and Moliarty help them out and bring them to the town where they live. Mr. Press and Moliary are expert hole diggers and are recruited by Ms. Millions who offers a lot of money to help her break a rock separating two villages. They are charmed by her and agree to help. They use DustMan and GroundMan.EXE to try and break the rock but they fail. Ms. Millions reveals that she has no and that she used all of it to break the rock because her husband lived on the village on the other side. Mr. Press and Moliarty decide to keep digging anyway with Mayl and M. Millions, using their bare hands and tools. Then the rock breaks and it is revealed that Chaud got the other village to help out.

He and Moliarty go to Lan's world and chase a coin dropped by Kosuke. 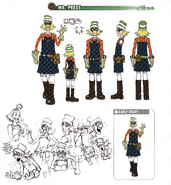 Concept art of Mr. Press.
Add a photo to this gallery
Retrieved from "https://megaman.fandom.com/wiki/Mr._Press?oldid=284705"
Community content is available under CC-BY-SA unless otherwise noted.