MMKB
Register
Don't have an account?
Sign In
Advertisement
in: Articles in need of citations, Mega Man Battle Network characters

Mr. Prog, known as Program-kun (プログラムくん, Puroguramu-kun) in Japan, also known simply as Program, is a single-function program in the cyberworld. They have the shape of a green being with ear-like hands on the head,[1] which can extend and grasp things as necessary to execute programs.[2] Mr. Progs are one of the most common characters in the Mega Man Battle Network series. They perform various everyday maintenance tasks on the cyberworld, act as security programs, and can delete very weak viruses. In addition, Mr. Progs appear in almost every area and give hints in stages and puzzles. If Mr. Progs are damaged or deleted, the electronic device that they are part of will malfunction. In the future, they are succeeded by Mr. Hertzes on the Wave Road.

In Lan's stove during its take over by FireMan.EXE, Mr. Progs were affected by the extreme heat and also provide MegaMan with Ice Programs that allow him to douse fires in the way of his progress through the stage.

Later in the Power Plant area, during ElecMan.EXE's attack, Mr. Progs give MegaMan the batteries needed to solve puzzle locks along the path. However, there are some Mr. Progs that are corrupted and will enter battle when spoken to or when found as a random encounter.

In DenTown, in the school where Ms. Yuri can be found, there are two Mr. Progs in the blackboard that claim to be reabilitated WWW viruses

In the zoo area controlled by BeastMan.EXE, Mr. Progs contain animal data and a specific one has to be used to destroy viruses with animal data. For example, a virus with hungry panda data would be destroyed by a Mr. Prog with bamboo data by eating until it explodes.

At the entrance to the Virus Lab in Scilab, there is a well-hidden comp where many Mr. Progs are gathered on break. One of them, when interacted with, reveals that their "ears" are actually their hands.

A troubling event requires Lan to Jack-in to a gargoyle statue within End City. Once inside the server Mr. Prog informs MegaMan that traps are scattered within each area and the only way to advance is to collect and lead the appropriate colored Mr. Prog ninjas to deal with the traps. Red ninjas are able to deactivate spear traps, white ninjas can disable ceiling traps and the blue ninjas have the ability to defuse water traps. Regular Mr. Progs are stationed throughout each area to inform MegaMan of what color, number and combination of ninja programs are needed to disable an upcoming trap.

During Captain Blackbeard's attack on the Seaside Town Aquarium, Lan is informed that he needs to Jack-in to activate the Feeding Time chime and therefore direct the frantic animals back into their enclosures. Within the Aquarium computer MegaMan is informed by Mr. Prog that fish programs (currently in the form of Mr. Progs) are deeply scattered in each area and need to be retrieved, whilst being aware of sharks on the way back, which force programs to reappear at their found location. After Mr. Progs are returned to their correct computer tank, they transform into their true animal appearance and a door to the next area is unlocked, allowing MegaMan to advance.

When taking a lesson from Al Ferry, Lan is required to operate ChargeMan.EXE and help him transport Mr. Prog passengers from three different stations on the net. A mini game is involved where ChargeMan.EXE needs to be correctly guided between three train tracks, collecting Mr. Prog passengers on the way and simultaneously avoiding (or crashing through) rocks which appear on the tracks. If ChargeMan.EXE collides with rocks or fails to pick up a passenger, the Mr. Prog status will decrease and several mistakes lead to having to retry the current level.

Mr. Prog manages the registrations for the Battle Chip GP. He also confirms class selections, announces tournament rounds and the start of battles as well as battle turns. In addition, Mr. Prog can be brought up during battle for the option to GiveUp, view Deck, or Retry the current battle.

Golden Mr. Progs start appearing in areas which were previously liberated. They store data regarding battles fought in their particular area, between Nebula and a certain Navi team. As a result, they have the ability to recreate Liberation Missions, allowing past battles to be relived.

A golden Mr. Prog can be found in Undernet2. This particular program can open and close the door that leads to Murkland, but only if requirements are met. Also once the door is opened, powerful viruses will infect the Cyberworld, but will retreat after the door is closed again.

While Mr. Progs are absent in the MegaMan NT Warrior anime series, it contains several programs with varying forms, being humanoid like NetNavis or resembling viruses.

A lineup of Mr. Progs, including a small one, in Mega Man Battle Network 3. 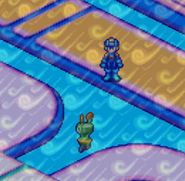 Mr. Prog as an information Navi for the Asterland chip shop in Mega Man Battle Network 6.

What power Mr. Prog is truly capable of in Mega Man Battle Network 6.