Mr. X (ミスターエックス, Misutā Ekkusu) is a fake identity of Dr. Wily's, which he used to mask his true identity in Mega Man 6. Mr. X is a mysterious billionaire of unknown origin that is the leader of the X Foundation. He sponsors the World Robot Alliance and is the sponsor of the First Annual Robot Tournament. In the beginning of Mega Man 6, he takes control of eight of the strongest Robot Masters in the tournament to help him conquer the world and mentioned that he was the one who manipulated Dr. Wily into helping him take over the world. Mega Man proceeds to stop him and his robots, and when he reaches him inside Mr. X's Castle, Mr. X attempts to stop the hero with the X Crusher, but fails. After his defeat, he revealed himself not to be manipulating Dr. Wily, but to be Dr. Wily in disguise. Wily then escapes to his Wily Castle.

In the comic series, a wanted poster for Mr. X appears in Roslyn Krantz and Gilbert D. Stern's police office. He is also mentioned in issue 48, where he was revealed to be responsible for recovering Dr. Wily from the destroyed fortress. Mr. X made his first physical appearance in issue 49. It should be noted that this is the only continuity to depict Mr. X as an actual separate character from Dr. Wily.

Mr. X revealed himself to Dr. Wily as he awoke from his injuries from fighting Mega Man, and introduced himself rather theatrically, something that Wily noted on but that Mr. X claimed was due to weakened inhibitions in his old age. Mr. X informed Wily that his organization was responsible for recovering his body and supplying him with medical care. As such, Wily was in his employ. He told Wily that he had seen the future and that humanity had embraced robotics. He required Dr. Wily, as he needed to unleash a "monster" onto the world, making people realize their mistakes. He supplied Wily with a new lab and informed him that it was time to build more Robot Masters (with Wily in turn planning to use Mr. X until he builds his own army and then take over the foundation). However, as Wily was about to begin, Sigma appeared to snatch him away through a Genesis Portal, something that Mr. X had been aware would transpire.

After the events from Worlds Unite is undone by Xander Payne shooting Sigma in the past, Mr. X welcomes Dr. Wily back. Wily realizes that Mr. X and Xander are the same person, apparently as a result of Xander's time alteration. Mr. X later revealed that the conclusion of the conflict launched him decades into the past, but to his frustration he lacked the ability to affect events from his own past. However, his knowledge of the future enabled him to make a fortune that he used to create the X Corporation, all as part of his plan to make the world safe from robots for humanity. His obsession with this agenda extended to permissiveness in the matter of Wily's abduction of Kalinka Cossack, and he instructed his subordinate Madam Y to look after their captive shortly before Shadow Man, Wily's sole remaining loyal Robot Master, appeared.

Mr. X is a mysterious man that became the chairman of the World Robot Alliance by organizing it through his immense funding and numerous talents. Under his guidance, the world of robotic engineering advanced by leaps and bounds, to the point where common scientists were able to create sophisticated robots. This led to the first ever global competition where powerful robots from all over the world gathered to determine, through battle, who was the greatest of them all. Mr. X took this opportunity to seize control of the most powerful participants in a bid to take over the world, later claiming to be the mastermind behind all of Dr. Wily's plans, but it was soon discovered that Mr. X was actually Dr. Wily himself.

Mr. X has a role similar to that which he played in the games. He claims to have manipulated Dr. Wily from behind the scenes, and unleashes the Mega Man 6 Robot Masters as seed players in the World Robot Championship Tournament. As in the game, he is discovered to be a disguised Dr. Wily. 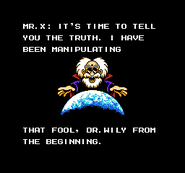 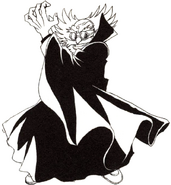 Mr. X revealing his true identity in the Rockman 6 manga.
Add a photo to this gallery

Retrieved from "https://megaman.fandom.com/wiki/Mr._X?oldid=319000"
Community content is available under CC-BY-SA unless otherwise noted.