The first level, Mega Man begins outside of the castle, attempting to break inside. A lot of the level involves climbing up, avoiding spikes and an abundance of Cannopellers.

The second Mr. X stage, it has an outer space feel, with large windows that give the player a view of the night sky. The level contains a large amount of Mets, as well as Skull Walkers in the later parts. There is also no vertical scrolling at all, making this level like a hallway of the fortress.

The fourth and last Mr. X stage, an area that seems to be used for robot production.

In the Rockman 6 manga, the X Foundation Headquarters is located in the center of a giant flying city named New Metropolis (ニューメトロポリス, Nyū Metoroporisu) that is hidden in space. When Mr. X's eight robots are defeated, New Metropolis descends and attacks a city with its weaponry. Mega Man invades New Metropolis and fights against its defenses, including Rounder II, an army of Mets, Power Piston and Metonger Z.

When Mega Man destroys the X Crusher, Mr. X reveals he is Dr. Wily and escapes, setting the New Metropolis to fall on the city. To save everyone, Mega Man rushes to the city's control room, but to his surprise, New Metropolis stops falling and goes up. When he enters the control room, Mega Man sees the Metall that was piloting Metonger Z, who stopped the fall and sacrifices himself by taking New Metropolis high in the sky and exploding it after Mega Man leaves with the Jet Adaptor.

The New Metropolis appears briefly in the beginning of "The Strongest Enemy to Date". When Mr. X attempts to conquer the world, Mega Man goes to New Metropolis and fights against Mr. X's eight robots, Doc Robot, Picopico-kun, Cockroach Twin, Big Pets, Mechazaurus, Tank CSII, and other robots before reaching Mr. X's Castle (Mr.Xの居城, Mr. X no Kyojou). Mega Man quickly takes down Mr. X, who reveals that he is actually Dr. Wily and asks for forgiveness. When Mega Man turns around, Dr. Wily tries to crush him with the Wily Machine 6, and as it is easily destroyed, Wily begs for mercy again, but this time he is shot in the head. However, that was a fake Wily robot, and the real Wily escapes. It is later revealed that at one point, Mega Man fought against an evil copy of himself before facing the eight robots, and the copy took his place, believing to be the original. 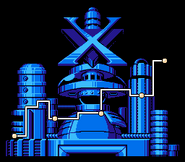 New Metropolis in the Rockman 6 manga.

concept art
Add a photo to this gallery

Retrieved from "https://megaman.fandom.com/wiki/Mr._X%27s_Castle?oldid=321237"
Community content is available under CC-BY-SA unless otherwise noted.