Janyse Jaud
Ms. Yuri, known by her full name Yuriko Ozono (大園ゆりこ, Ōzono Yuriko) in Japan, is a character and former antagonist in the MegaMan NT Warrior anime series, debuting in Axess. She is the operator of SpikeMan.EXE and the long lost twin sister of Ms. Mari, who she was separated from fifteen years before the start of the series. Ms. Yuri was a major antagonist throughout Axess, acting as the catalyst for most of Lan Hikari and MegaMan.EXE’s conflicts throughout the season, though in Stream she becomes marked with the Crest of Duo and instead joins Lan in his quest to save the Earth from Duo, becoming an ally to the boy from then on and becoming a more just person. When merged with SpikeMan, she becomes C.F. SpikeMan (C.F. NeedleMan in Japan).

In her youth, Ms. Yuri was a kind, spry and energetic girl who cared about her sister and her family with all her heart.

After a plane crash that only left her and Dr. Regal alive and her subsequent saving by Duo and raising by Mr. Wily, she became cunning, deceptive, athletic, and quick on her feet. She often disguised herself as Ms. Mari to fool the likes of Lan Hikari and his friends, much to the confusion of Ms. Mari when they confront her about actions she did not do. She once also disguised herself as Manuela to deceive an oblivious Gorou Misaki into being experimented on with Dark Chips so that Misaki could achieve Cross Fusion. Though she managed to turn Misaki into a human Darkloid, she would later save Misaki from Dark ProtoMan.EXE after he attempts to help her, and the two would begin to share a bond as the series continued.

Despite her actions, it is shown she is conflicted between her purpose as Duo's probe and a member of Nebula and longing to live a normal life and be with her sister. In Stream, Duo marks his crest onto her, and she eventually joins Lan and the other Cross Fusion Members in Duo's trial, becoming a much more honorable and just person, saving Lan multiple times and helping him save the planet from Duo's wrath.

She is a member of Nebula in Axess and partners with Dr. Regal. She uses SpikeMan.EXE to cause trouble and can disguise herself as Ms. Mari easily, the only difference being the lipstick, eye shape (though it sometime resembles Ms.Mari's as seen in Gauss' photo of her) and hair bun (Ms. Mari shapes her hair like a cinnamon bun; Ms. Yuri's hair is more croissant shaped). She is portrayed as a mysterious character, whose past is unknown and appears in the sidelines, rarely getting directly involved, but often the secondary mastermind to everything, directly below Regal. Despite her role and serious personality, she is also sometime used in comical situations.

Ms. Yuri first appears when Lan first learns the existence of Dark Chips, and the navi Needleman, under her disguise of Ms. Mari. During the battle, Ms. Yuri attempts to trick Lan into using a Dark Chip. During the battle, Lan easily tells she's a fake while Megaman forces Needleman away with the use of RollSoul. After the battle, Yuri escapes and Lan bumps into the real Ms. Mari. Upon learning the possibility of her sister's return, Ms. Mari becomes worried.

She is revealed to be Ms. Mari's sister, but is supposedly dead. Her past is explored in an episode involving Misaki, a NetPolice Detective that she tricked. She was on a plane trip fifteen years prior to Stream with her and Ms.Mari's father along with a young Regal, returning from Europe. The plane had an accident, though, and everyone aboard died including her father. Duo happened to be passing by Earth at that moment, and decided to pick two test subjects to turn them into Probes to survey humanity and the evolution of the Network system, resulted in her miraculous survival (at Duo's request) and gained new powers, such as quick recovery from physical injuries that otherwise would prove fatal and high Synchro Ratings, and immunity to the Dark Chips corruption, allowing her to easily Cross Fusion with Needleman through Dark Synchro Chip without fearing for the side effect.

When the people of SciLabs were working on the Battlechip Gate, Ms. Yuri took on a disguise of Manabe to trick Misaki into using a Dark Synchro chip. The results did allow Misaki to finally crossfuse, however it temporarily turned him evil.

Towards the end of Axess, Ms. Yuri is out shoping and has the displeasure of running into a recovered Misaki. During the chase, she takes her sister hostage in an effort to escape. During this time, Ms. Yuri is hit by a van, causing her be greatly injured. After escaping from her transport, Ms. Yuri goes to her hideout and begins to remember her past. Now questioning her loyalty to Nebula, Regal then orders Ms.Yuri to kill her twin sister by giving her a Dark Synchro Chip. Despite her resolve, Ms.Yuri refuses and in the ensuing battle she is thrown into the sea with Misaki, courtesy of ProtoMan, who was under a Dark Chip's influence.

Ms. Yuri resurfaced in Episode 21 of Stream, 'Dr. Wily's Daughter'. It is revealed that she brought Misaki to the hospital and then fled. She meets with her foster father, Dr. Wily, and is given a Synchro Chip. Questioning her path in life, Ms. Yuri reunites with Ms. Mari on their shared birthday. After coming to terms with her past, Ms. Yuri uses the Synchro chip to help Lan when he was ambushed by all of Neo-WWW. During the rest of Stream, she pops up from time to time to assist the people chosen by Duo.

In episode 47, she is contacted by Dark Rockman, who asks for her Crest of Duo in exchange for Mariko’s safety. She appears to relent, however when she meets Dark Rockman at the Dark Chip factory, she tells him she won’t give her crest over to him and that she intends to fight him. Dark Rockman and CosmoMan materialize before her, and she cross fuses. They attack her and ask if she thought she could take them on alone, and she states that while she has always fought alone, she has learned the importance of teamwork. C.F. Rockman then fires at Dark Rockman and tells Yuriko that Marino is safe, and him and C.F. NeedleMan fight against the two Darkloids, with Yuriko fighting CosmoMan.

C.F. Rockman tells her help is on the way and she attacks CosmoMan with a Long Sword, but a revived Dr. Regal materializes behind her and grabs her. He forcibly takes her crest and shocks her, causing her to uncross fuse and faint. However at the end of the fight she awakens.

She is last seen in Episode 26 of Beast+ along with Mariko and Tamako Shiraizumi in a hot spring resort.

Concept art of Ms. Yuri and Ms. Mari as children. 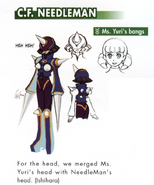