The Mu (ムー, Mū) is an ancient culture within the Mega Man Star Force series. It was an ancient civilization on Earth, from which may have formed the Zerker, Ninja, and Saurian tribes. The empire eventually fell, and its last descendant is Solo.

The history of the ancient Mu is outlined in several symbols obtained while on the rediscoved Mu continent in Mega Man Star Force 2.

"There was a tribe of people with the power to see EM waves... the Mu." -Kath

"That special power of Mu was the object of fear from other peoples of the world, who sought to drive them out." -Fon

"Their search led them to Earth's End. And there they found the Great Being, the source of all EM waves." -Wol

"The Great Being first gave the Mu language." -Tuk

"The Mu people got their power to manipulate EM waves from the Great Being..." -Mir

"The Mu technology for materializing EM waves allowed their civilization to advance. And for a time, lived in peace..." -Ebesh

"One day Invaders appeared in the Mu's land, Earth's End, and tried to drive out the people of Mu." -Masa

"After the appearance of the invaders, the Mu were divided into those who embraced war and those who rejected it." -Foh

"Humans who rejected war, forsook their land and scattered across the Earth... And those who embraced war, used the power of EM waves to raise their land into the sky." -Fai

"Those Mu who left Earth used EM warriors to wipe out the Invaders." -Rai

"The Mu in the sky conquered all of the peoples on the ground and ruled the Earth..." -Chan

During the events of the second game, Dr. Vega attempts to restore the civilization of Mu by bringing it up from the sea and resurrecting Le Mu with the power of an OOPArt. She enlists the help of Hyde, Solo, Hollow, and several UMAs in order to bring her plans to fruition. When Vega does eventually get her hands on an OOPArt from Geo Stelar, she attempts to use the reformed Mu Continent as a staging ground for starting the Neo Mu Empire. She sends out countless UMAs in order to test the people of earth by seeing who will not betray their friends. In the end, her plans fail, and Le Mu is defeated by Mega Man. Mu then crumbles and falls back into the ocean, taking the OOPArt with it.

Mu tech plays a very minor part during the events of the third game, as Rogue learns that it had been stolen and used in Dealer's Noise machinery. Interestingly enough, this results in Rogue saving Mega Man by accident when the Mu machinery he destroys had caught Mega Man in a death trap.

Just before Mega Man enters the Black Hole Server for the first time, he is stopped by Rogue, who was waiting for his chance to attack Sirius. Rogue explains that Sirius has a piece of Mu Metal, a substance from his civilization that he could use with Laplace in order to begin the resurrection of his civilization. However, the metal only emerged from Sirius once every few days and Planet FM would be destroyed by then. Unable to let that happen, Mega Man defeats both Rogue and Sirius and ends up absorbing the Mu Metal himself. Rogue accepts this, as it simply gives him another reason to kill Mega Man and an opportunity to get the metal back.

In the anime, Mu played the main role in the Tribe season. According to Doctor Orihime and Solo, the people of Mu had sacrificed themselves to seal away the continent of Mu and Ra Mu in a separate dimension 12,000 years ago, an act that sealed Solo away as well, making him the sole survivor of the event. The seal was maintained and kept hidden until the appearance of FM King Cepheus, who's power was so great, the seal on Mu broke and the three OOPArts awoke and Mu temporarily appeared in the world, a planecraft narrowly avoiding crashing into it.

Seeking to restore Mu, Orihime recruited Subaru and Warrock to help them uncover the three OOPArts, by lying to them in saying that she had wanted to protect the world from Mu. After being saved from Burai, the latter whom had also awoken and escaped the dimension Mu was sealed in to prevent Mu's awakening, Subaru and Warrock agreed to join Orihime.

Many areas had been assumed to have been in contact with Mu and might have had the OOPArts hidden within them, from snowy mountains to the pyramids. Areas with influence of Mu have Wave Roads that are colored red instead of yellow.

The gate of Mu appeared, connecting Earth and the dimension Mu was sealed in, when the three OOPArts were gathered together when Rockman battled Burai in Thunder Berserk form to acquire the Shuriken of Shinobi, and Yeti Blizzard, whom had also acquired the Stone of Dinosaur in an earlier event. Burai attacked the seal, causing an intense gravity shock to strike down on Rockman, Yeti Blizzard, and Phantom Black, as the gate took Rogue into its dimension, before the gate vanished.

After Empty took the two OOPArts from Yeti Blizzard and Phantom Black, and Orihime had revealed herself to have been lying to Rockman, Empty and Rockman battled, where Rockman managed to gain the upper hand later in the battle. However, Orihime infused the two OOPArts they acquired and the resulting surge in power caused the gate of Mu to appear once more, where Rockman and Empty ended up going through for the remainder of their battle, to which Empty emerged victorious.

Orihime had entered the continent of Mu through the gate, along with Hyde and Gori, whom agreed to join for the promise of being rewarded with immortality and vast wealth respectively.

Inside the continent of Mu, the wave roads were all colored red, and all the buildings were empty. Along with that, there were many viruses that were scattered around and attacked anyone they met.

Subaru, who was traveling alone after Warrock left him to keep him from getting hurt by Empty, met up with Harp Note, and found themselves in a building, where they found a device that had a strange liquid, and inside the liquid was a recovering Solo. After Burai had been returned to Mu from his previous incident, Solo likely had suffered great wounds and had retreated to the device to get himself healed.

Despite not having recovered completely, Solo awoke and emerged from the device and told the story of why he was after the OOPArts and attacked Rockman, as he was acting as a guardian and wanted to prevent Ra Mu, the god of EM waves in Mu, from awakening.

Orihime had entered the deepest chambers in Mu with Empty, Yeti Blizzard, and Phantom Black where they found a statue of Ra Mu, and three devices around the area, where they placed the three OOPArts. From the power beginning to be drained from the OOPArts, the floor in the chamber collapsed and a strange liquid that bore a resemblance to the Darkness of Isolation of Burai's right hand began rising, and an unconscious Warrock fell into it. The liquid, according to Orihime, was meant to devour any EM beings that were inside it.

After Subaru rescued Warrock and reclaimed the Sword of Berserk, get absorbed the other two OOPArts to become Tribe King, which he used to destroy Empty with.

After Rockman escaped Mu with Harp Note, Cancer Bubble, and Heiji Goyōda, they then witnessed Ra Mu having awoken and attempting to force the gate to expand to allow it through, before Burai appeared and used all his power to try pushing him back, and shouted at Rockman to destroy the gate now that all three OOPArts were inside Rockman.

Unleashing the Czar Delta Breaker, Rockman transformed into Tribe King and pushed Ra Mu back completely, before Burai also entered the gate as well, and the gate of Mu vanished without a trace, likely having been completely resealed or destroyed, to which it is unknown, along with the fates of Orihime and Burai, whom had remained at Mu.

In the manga, the continent of Mu is made of eight large floors, each protected by minions of Burai. Yeti Blizzard works in the entrance alongside other guards, the first floor (Party Room) is protected by Phantom Black, the second floor (Boiler Room) by Dinosaur, the third (Bath Room) by Brachio Wave, the fourth (Sauna Room) by Condor Geograph, the fifth by Shinobi, tne sixth by Auriga General, the seventh by Empty, and by Burai in the top floor.

Very little is known about the ancient Mu continent, however it is believed to be similar to that of the Whazzap culture, worshiped ancient creatures or deities, most notable being the UMA. The culture is also extremely fond of arts, produced an array of beautiful crafts and technologies based on ceramics, as shown in the resurrected continent that it has an enormous number of crafted and carved drawings on walls or using them to contain the continent's history as in above, especially in large structures and building.

The people of Mu, however, pursue strength solely on their own, to the point that this has almost become a rule for them. They are specialized in training soldiers called Murian and used them to conquers from lands to lands on Earth's surface. At least three Tribes were born from the distinction and developed further traits of its own, such as Zerker, Ninja, and Saurian tribes. It is possible that Mu has been the centre of the ancient Earth for a long period before its destruction. Its influences were so large that temples have risen from various places on Earth which still exists until nowadays, like Whazzap.

Science and technology in the Mu continent is far more advanced than the outside regions. The uses of EM matters have evolved the culture, as it is possible for them to hibernate EM beings, teleportation and/or levitation, therefore affects the lives of its people greatly. Scientist achievements such as cloning EM beings and dark energy manipulation mingle with magical elements such as spontaneous EM Wave Change. The state of technology conceivably places the timeframe we see in either the present day, or perhaps in the future, similar to the concepts of high-intellectual development of ancient real world cultures compared on present day. It could be said that, without EM technology, Mu wouldn't be such a dominating culture.

The most advanced technology presents is the ancient Star Carrier, which bears the almost similar shape and functions to the newest renditions. The EM energy is also used explicitly as the mean of weapons, both projectile and close-ranged, or even massive cannons that cause large destruction waves upon firing. The dark power concept, however, wasn't as popular as the first one, but provides much more useful than EM technology, and apparently, harder to control. This power have been used extensively by Rogue and having great impacts on other EM beings. The purpose and its origin was never discovered, however. The Mu continent also crafted this energy into ancient objects, one such as the Indie Proof. 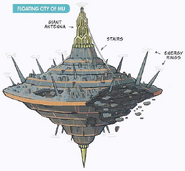 Concept art of the continent of Mu. 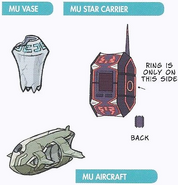 Some characters from the Mu language.