"Supra-Force Metal... No matter how precious it may be... It can't be worth all this conflict and bloodshed! We must stop the Rebellion, X!"
―Nana, Mega Man X: Command Mission

Nana (ナナ, Nana) is a character in Mega Man X: Command Mission. Like Alia, she serves as a Navigator in the game, assisting the Resistance faction of Giga City with her abilities as a Navigator, organizer, and computer specialist against the intentions of Epsilon's Rebellion Army.

Nana is a female Reploid with a fair complexion, blue eyes, and medium-length pink hair with a white fringe. Her armor is mostly a light beige with orange accents on the chest, leg, and arm areas, and has a belt that is in the shape of a horseshoe. Following her namesake, her chestplate features two sevens in peach letters. As with most navigator Reploids, she has a headset and an antenna on one of the red pieces on her head.

Nana is a rather dutiful and quiet girl, speaking in a reserved and polite manner. She is saddened by violence and takes her work very seriously, doing all she can to help the Resistance stop the Rebellion and restore peace in Giga City. It can be speculated that her reserved character is a result of her abduction by Silver Horn, who tortured his prisoners.

When the Rebellion attacked the Central Tower area of Giga City, Nana was abducted by Epsilon's followers. She was brought to a POW camp, led by the cruel Silver Horn to serve as an operator of the facility, while a hostage herself. She was confined to a computer chair from which she was forced to regulate and watch the installation. Upon Chief R's request, X and Spider infiltrated the camp and (with the help of Steel Massimo) freed Nana. She had nearly been crushed by Silver Horn as punishment for her role in getting the Maverick Hunters inside, although he was ultimately defeated by X, Spider, and the new Steel Massimo. She was then brought back to the main isle of Giga City, taking up the duty of navigation. She was responsible for the operation of the teleportation to different mission locations, as well as maintaining contact with Colonel Redips, X's superior officer during the Giga City affair.

Upon the destruction of Epsilon by the hands of X, Zero and Axl, assisted by Marino, Massimo and Cinnamon and the preservation of the Supra Force Metal, Nana was sad about the Hunters' departure, fearing she might never see them again. She was with them when their pickup arrived which turned out to be an ambush of Redips' followers, who had been planning of using Epsilon as a scapegoat to get his hands on the Supra Force Metal all along. During the ambush, Chief R was killed and the group scattered. Nana wasn't seen again until the end of the game, sitting somewhere outside Giga City, waiting to hear from her friends when she saw the explosion of the Supra Force Metal ore in space. 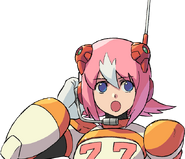 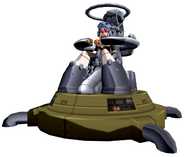 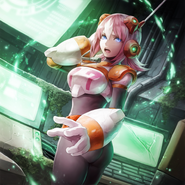 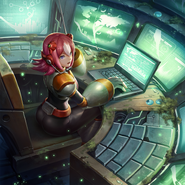 In the TEPPEN card Underwater Intel.