"Hahaha! You're doomed! None can stand against a walking arsenal like me!"
―Napalm Man, Worlds Collide

Napalm Man (ナパームマン, Napāmuman) is a Robot Master from Mega Man 5 created by Dr. Wily to help defend and protect his secret weapons factory, where he would spend his spare time collecting and searching for weapons as strong or stronger than his own.

Napalm Man is a weapons enthusiast equipped with an array of explosive weapons all over his body - he is equipped with Napalm Bomb launchers in his arms, a large missile launcher in his head, and also launch six smaller homing missiles from silos concealed in his shoulders. He has treads on his feet and can increase his speed with a rocket booster on his back.

Napalm Man is generally considered to be a walking weapon, so even his allies feel uncomfortable near him, resulting in his lack of friends. He is however very loyal, and more intelligent and diplomatic than his appearance would suggest, being an expert in the fields of both weaponry and negotiation.

Napalm Man is one of the eight bosses. He attacks by shooting two Napalm Bombs from his arms and then jumping, which can be avoided by sliding to the opposite side, but the player should make sure there is enough space to the side Mega Man is, for if he gets cornered, it will become almost impossible to dodge his attacks. Napalm Man also attacks by shooting head missiles which can be avoided by just jumping over them. He is weak when he has jumped and when he finishes firing missiles. His weakness is the Crystal Eye, but it should be fired at a wall, to increase the chances of two orbs hitting him. It takes him out in minimally five attacks, but more if two orbs do not hit him in the same attacks, up to a max of ten attacks.

Napalm Man is one of the four bosses fought in the Wily Station. He has the same attacks as he did in Mega Man 5, as well as the same weakness, but he has been added a secondary weakness: Pharaoh Shot. Crystal Eye defeats him in minimum four attacks if two crystal orbs hit him and more if that not happens, up to a max of seven attacks, while the Pharaoh Shot which defeats him in ten uncharged shots and four charged ones.

Napalm Man also inherits the same attacks in this game, but now he is weak to the effects of the Flash Stopper.

In both games, Napalm Man uses his previous attacks and the homing missiles from his shoulders. He can also speed up using the treads on his feet and a small rocket on his back. He is weak to Gemini Laser in both games, due to its ability to short out the firing mechanisms of his weaponry.

Napalm Man uses the Patriot Bomber, a resistant tank-like vehicle able to attack with bombs and other explosive weaponry. He wants to use the prize money to create his own Weapons Museum, and if the player wins using him, he successfully builds and stocks the museum with the prize money, but no one visits it. After waiting for a while, one guest visits the museum, but says it's boring. Angered by the comment, Napalm Man accidentally blows up the museum with his own weapons.

Napalm Man appears in Rockman Strategy as a recurring enemy, appearing first in Indonesia in a volcanic caldera. He was dispatched by Dr. Wily to aid Leo, along with Heat Man; later he appears as part of a "tribe" with Tomahawk Man and Pharaoh Man. He has ten missiles on his shoulders instead of six, and does not have the rocket on his back.

Mega Man Legacy Collection text: A robot who protects Dr. Wily's secret munitions factory. The explosive range of his Napalm Bombs isn't as wide as it appears to be. So don't worry, and just dodge.

Displays the amount of damage in units that Napalm Man will receive from each Special Weapon in Mega Man 5.

Napalm Man has a brief cameo appearance in the opening of the Mega Man animated series, but never appeared in any episode. He was also seen in the show's pilot commercial firing all of his missiles. The commercial and the brief cameo in the cartoon intro was Napalm Man's only involvement in the series.

Napalm Man is a combat robot who is essentially a walking armory. Aside from numerous missiles, Napalm Man also has Napalm Bombs installed on his arms. Napalm, which is a mixture of fuel and thickening agents, is accompanied by several mini-bombs in each of Napalm Man's Napalm Bombs. Upon impact, the napalm and mini-bombs are scattered around the area and the resulting explosion, known as the Fire Storm, spreads intense fire over a wide area. To account for the powerful effects and huge range of the Fire Storm, the Napalm Bombs have a built-in time delay feature to give Napalm Man a chance to avoid damage from his own attack. The Fire Storm is more effectively used as a wide range trap than it is as a focused attack aimed at a specific target.

Napalm Man first appeared in the story "Holiday of Soldiers", where the eight Robot Masters from Mega Man 5 have a part-time job at an amusement park to earn money for Wily. He works at the box office.

In Mega Man Gigamix, he participates in the Battle & Chase competition, but is defeated by the Gilliam Knights that attacked the competitors, allowing Roll to escape. Later, Auto and Bass find Napalm Man unconscious and plan to use his vehicle's parts to catch up with the other racers, when they find out the Fifth Numbers were pedaling energy into the vehicle, which leads to Bass and Auto remarking to pretend they didn't see it.

Napalm Man first appeared in the Worlds Collide arc in Sonic Universe Issue 53 and Sonic the Hedgehog Issue 250. In the latter issue, he attacked Shadow with his Napalm Bombs during the fight against the time-cloned Robot Masters, overwhelming him and causing him to brag about Shadow being no match for a "walking arsenal." However, he is then knocked away by E-123 Omega, who was unimpressed with his "pea-shooter" weapons.

In Mega Man #54, Napalm Man's arms and legs can be seen among the several robot parts Dr. Wily is working on.

Napalm Man is one of the racers. He captures Chill Penguin during the race, and Chill Penguin tries to escape by attacking him several times. Angry, Napalm Man throws him off his car, but he's rescued by Mega Man. 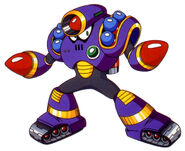 Front, side, and back view of Napalm Man. 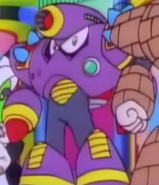 Napalm Man in Mega Man: Upon a Star.

Napalm Man in the Rockman 5 manga.

Napalm Man and several other Robot Masters being constructed in the comics. 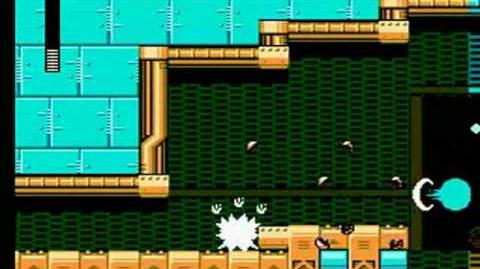 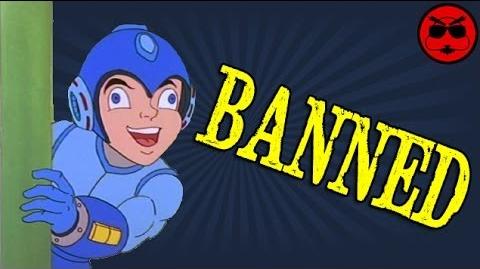