The Navi Customizer (ナビカスタマイザー, Nabikasutamaizā), NaviCust for short, is a NetNavi customization program released by SciLab in Mega Man Battle Network 3. Yuichiro Hikari is the chief developer of the program. It was made for the PET models Plug-in PET, Advanced PET, Progress PET, and Link PET_EX.

In Mega Man Battle Network 3, if Lan uses a Navi Customizer program that the current Style did not support and rebooted MegaMan.EXE, he'd get an error, MegaMan would not be able to boot up, unless remedied with an Extra Code. However, in the fourth, fifth, and sixth games, the errors disappeared due to MegaMan overloading to destroy Alpha. In doing so, he nearly killed himself, but when Lan gives Yuichiro Tadashi Hikari's letter, MegaMan is recovered from Alpha's body. However, his letter removed the Style Change. So, Double Soul was made as a suitable replacement.

The Navi Customizer consists of a set area, and a Command Line running through the center of the area. Through all of its incarnations, it has four basic rules:

Breaking any of these rules will result in bugs occurring in MegaMan, and each bug has different effects depending on the part(s) that violate the rules. All bugs can be omitted by the NaviCust program BugStop, which allows most rules to be broken; solid programs still need to have at least one block on the command line to take effect.

Each NaviCust piece is a combination of blocks, and is either completely solid or completely textured. If the player possesses the Spin item of a piece's color, they will be able to rotate all pieces of the same color with the L or R buttons - a valuable asset when it comes to maximizing the use of the NaviCust's limited space.

The NaviCust is always at a tiny 4x4 area the moment the player receives it. To expand it, the player must find "ExpMemory" items, which will boost the space to a 5x4, and eventually a 5x5 area, allowing for maximal programs to be installed.

The NaviCust is always introduced with the Undershirt, Attack+1, and Speed+1 programs.

In Mega Man Battle Network 6, parts can now be placed off the Navi Customizer's main area, on the condition that at least one block of the part is left in the main area. Also, regardless of whether or not a block is on the main memory map, no blocks can be placed on the outside corners of the map (i.e. off-map areas only extend off the main map and do not allow corners outside of the map). This has resulted in the total space available being almost doubled. The Command Line is also capable of reading "hidden" parts, as long as they're aligned with the main Command Line. However, placing parts off the main area will, once again, result in bugs.

If any of the programs to be installed are of an incompatible color, the NaviCust will bring up an error, and MegaMan will not be able to boot up, unless the player can remedy this using an Error Code with the ModTools accessory. The Giga Folder and Hub Batch programs are purple and orange respectively, forbidding the player to use them in any Style without their proper corresponding Error Code.

To use the Error Code, press Select in the NaviCust when the system reports an error or says "OK!". The screen will bring up a series of alphabets and numbers. By inputting the correct sequence, Lan can remedy the error and allow MegaMan to boot up. If no incompatibility error is present, the Extra Code can be inputted to give MegaMan extra abilities. Be warned that some abilities have side effects.

Note that after successfully inputting an Error Code, the game will remember the same code every subsequent time that error is encountered, and will automatically input the code when the Extra Code interface is brought up during the error report.

Programs can be reduced by a few squares by inputting a Compression Code. Doing so will shrink it, allowing for more programs to be inserted. Each program has its own unique compression code in each game. In Mega Man Battle Network 3, to input the compression code, highlight the program that's going to be compressed, hold Select, and input the commands (by pressing a sequence of buttons on the controller). In Mega Man Battle Network 5 and 6, highlight the program, hold Right, and input the commands. Mega Man Battle Network 4 does not utilize Compression Codes as the Programs come already pre-compressed. Note that if inputting the incorrect button during in a sequence, it will play an "incorrect" sound for that specific button, allowing trial and error knowing which button to press is the correct one (this doesn't happen on MMBN6, as there no indication).

Navi Customizer Programs are the program blocks for the Navi Customizer that allow a NetOp to upgrade and personalize their NetNavi with new abilities.

These programs must be placed on the Command Line to have their effects applied. Failure to do so would not only prevent them from working, but will also create bugs in programming. All the following programs can be found in all games from Mega Man Battle Network 3 to 6.

These programs have four shaded squares on each tile. They must be placed off the Command Line. Failure to do so will cause bugs. The following programs can be found in Battle Network 3 to 6.

The following programs appear only in certain games. 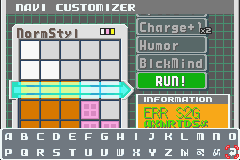 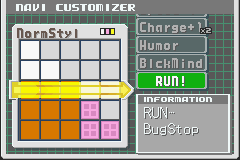 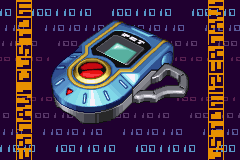 The Navi Customizer starting up. 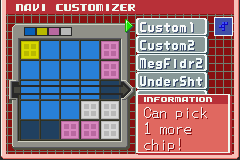 Retrieved from "https://megaman.fandom.com/wiki/Navi_Customizer?oldid=253194"
Community content is available under CC-BY-SA unless otherwise noted.