Nebula Gray (ネビュラグレイ, Nebyura Gurei) is a dark, monstrous program made entirely of Dark Power, created by Dr. Regal. It is the cornerstone of his research on the darkness within the human's soul.

Having not only the power to amplify negative emotions but also to give them tangible form, it serves as the very core source of the creation of Dark Chips and instrumental in Regal's plan to fill the world with pure evil.

Nebula Gray is the final boss of Mega Man Battle Network 5. When Team ProtoMan/Team Colonel attack Nebula's HQ and deletes the Darkloids, the Darkloids in turn absorb them one by one into a dark vortex until MegaMan is the only one left. The Darkloids tell them that the vortex leads to the Dark Galaxy, a dark world created by Dr. Regal made entirely of darkness and Nebula Gray, a Dark Star at the center of the Dark Galaxy. After the team reaches and confronts Regal, they learn of his plan to taint the world with evil by linking the whole world’s souls by using SoulNet and then installing Nebula Gray into SoulServer to taint the world with evil.

MegaMan then jacks in into SoulServer and confronts Nebula Gray. At the end of SoulServer, he finds Nebula Gray to be a dark vortex with a blue flame hovering on top of it. Regal then explains that Nebula Gray is actually the digitized and amplified form of man’s evil soul. He then uploads that data into a system that converts it into various forms. He reveals that Dark Chips are made by grafting Nebula Gray's amplified evil souls into chip data, meaning that the human dark souls are the source of Dark Chips. Nebula Gray then transforms into a giant monster composed of a flaming head on a body of Dark Souls, having a vortex in the place of legs, and chains all over his chest and back. MegaMan then engages in a battle with Nebula Gray and wins.

However, dark souls return from inside the vortex and cover MegaMan, tainting him with evil. Lan takes off his MagnoMetal amulet to communicate with MegaMan’s soul using SoulNet, but fails. Then the voice of Lan’s grandfather comes out of nowhere and tells Lan that he’s always linked with MegaMan. MegaMan then transforms into his human form, Hub, and closes the vortex with Nebula Gray and locks him in a small metallic capsule.

However, the blue spirit of Nebula Gray returns and attacks a weakened MegaMan, only to have Colonel/ProtoMan save him by catching the spirit. MegaMan tries to shoot but is too exhausted, due to his attempt to lock Nebula Gray in the capsule. This takes a huge toll on MegaMan due to the amount of power that Nebula Gray had. So his friends and the rest of the Team come and lend him their power through SoulNet. With a powerful charged shot, he permanently destroys Nebula Gray, along with SoulServer. Regal’s memory is then erased by Dr. Wily and he then starts a new life as a law abiding scientist.

Within the Nebula Area resides the birthplace of the Darkloid King Chaos, also known as Chaos Lord. It can take on several forms; MegaMan’s Dark Soul, Bass.EXE, or Nebula Gray (although one can technically assume this is meant to be Bass).

Nebula Gray appears in the movie Rockman.EXE: Hikari to Yami no Program, which takes place somewhere in the middle of Rockman.EXE Stream. In this instance, Regal does not create Nebula Gray, but becomes him.

After his defeat in Axess, Dr, Regal had been transformed into data and became stuck in the cyberworld. He then begins to apply a new evil plan of using the Tadashi Hikari program to activate the Spectrum program, which causes beams of light to shoot through the real world transforming everything they touch into data. Regal wants to transform the whole world into network data, and to assist him in his plan, he becomes the monstorous program Nebula Gray. He even captures Bass, brainwashing and manipulating him to attack MegaMan. Colonel then interferes and Bass is returned to normal. When MegaMan is about to destroy the Tadashi Hikari program, Nebula Gray appears and absorbs it, while the NetNavis retreat. Lan, Chaud, and Raika infiltrate the Netopian military base where Regal resides. There they meet a man called Baryl, who turns out to be Colonel’s operator. MegaMan jacks in to stop Regal, while Bass also appears, intent on having his revenge on Regal. However, neither of them is any match for Nebula Gray, who defeats them both with ease. MegaMan and Bass then unite, creating BassCross MegaMan. He then completely obliterates Nebula Gray, resulting in Dr. Regal summoning a black hole in a desperate and suicidal attempt to destroy them all. Bass pushes MegaMan out of the black hole’s way as he gets sucked in himself. Bass then absorbs Nebula Gray’s power by himself, while Regal disappears, as the base crumbles.

Nebula Gray's silhouette appears during the confrontation between Bass and Slur in episode 51 of Stream, showing that Bass has indeed absorbed the power of Nebula Gray after the events of the movie.

Like Duo, Nebula Gray is a final boss that has 4 versions. However, unlike Duo, these versions can all be fought on the same save file.

Nebula Gray is invincible. The only way to damage him is to attack the blue flame orbiting him. In the movie, he does not have all these weapons, but is much stronger than his game version, as he is seen to single handedly defeat MegaMan and Bass.

Also, due to the hand in the way, Nebula Gray's field is immune to Area Grab, and his weakpoint can only be hit by attacks that do not involve the ground. 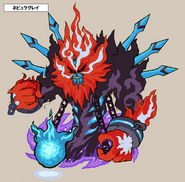 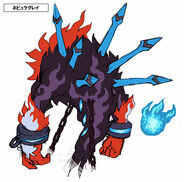 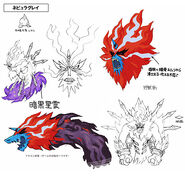 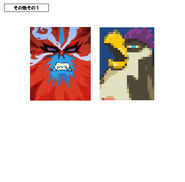 Nebula Gray in the movie.

Nebula Gray in the movie.

Nebula Gray in the manga.