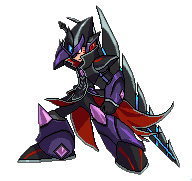 Nero L (ネロ・L, Nero L) is a reploid boss from Rockman Xover that appeared in World 12 and the Battle Tower. He is the leader of four reploids known as the "Four Heavenly Kings" (四天王, Shitennō):[1] Blu D, Rosso M, Oro S, and Verde R.

His background is completely unknown.

When all main worlds are completed and all their bosses reach level 8, Nero L appears and decides to help OVER-1 by giving him a Portal Charger (ポータルチャージャー) so he can rescue the missing Mega Man heroes.[2]

Nero L has two attacks, one where he jumps in the player's direction and quickly falls with his sword for a strong impact slash, and other starting with him dashing to stab the opponent and following with a rising slash.

While he did not appear in the series proper, Nero L is one of the many characters featured in the Short Circuits for Mega Man Issue 55, the concluding issue of the series. He appears with OVER-1, the pair being jointly described as "The Mobile Phone Mega Men" while X and Mega Man look on in chagrin. 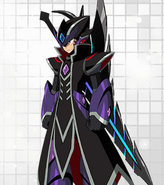 Nero means black in Italian. The L in his name may be derived from lama, blade in Italian.

Retrieved from "https://megaman.fandom.com/wiki/Nero_L?oldid=324100"
Community content is available under CC-BY-SA unless otherwise noted.