The Neutral Armor (ニュートラルアーマー, Neutral Armor) is the standard armor set from Mega Man X8, obtained in the first Light Capsule found alongside a part for the Icarus Armor or Hermes Armor. The armor itself gives X no enhancements on its own. However, it is the basis for other armors, having the ability to mix and match parts of the Icarus Armor (I Parts) and Hermes Armor (H Parts) to give the Neutral Armor a customized mix of individual abilities. Having a complete single-colored set of parts in the Neutral Armor will grant X an armor system with glowing parts, which also unlocks the Giga Ability of that specific armor (usable by pressing the Special Weapon button whenever X isn't equipped with any Special Weapons, or by selecting the Giga Ability in the Sub Screen). Unlike previous armors where usage of those Giga Abilities permanently drains the weapon energy, the weapon energy can be recharged over time whenever X is the main Hunter for the mission. 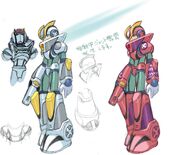 Ultimate Armor
Add a photo to this gallery
Retrieved from "https://megaman.fandom.com/wiki/Neutral_Armor?oldid=303164"
Community content is available under CC-BY-SA unless otherwise noted.