Nightmare Mother (ナイトメアマザー, Naitomea Mazā) is the boss of the first part of Gate's Secret Lab in Mega Man X6. Each Nightmare Mother is an aggregation of Nightmare Viruses that spin throughout the room, stopping every so often to open their eyeball-shaped cores to attack.

Before the fight begins, the warning sign appears on screen, as usual for all bosses X4-onwards. Then the Nightmare Mothers appear, with the sound of a beating heart, before the eyes materialize, and the fight begins.

The Nightmare Mother moves around the room in a circular pattern, each one always on opposite sides, starting on the top left and bottom right of the room. They stop for a brief moment between each move, and they may change their direction. After losing half of their life energy, and on higher difficulty levels, there is no interval between the moves. The speed of the transition between walls also depends on the difficulty level, and on harder difficulties they will occasionally shoot energy spheres while moving. Every once in a while, they will stop to launch an attack from their cores. Occasionally, they will stop stacked on the same surface. When one of the two cores are destroyed, the empty shell of DNA will slam into the surfaces while the other one launches attacks, further limiting the space the player has to maneuver.

Their only vulnerable area are their cores, which are weak to the Metal Anchor (with X) or Rakukoujin (with Zero). They are usually protected by the DNA-shaped mass, but are vulnerable while attacking. X with the Shadow Armor can deal massive damage to the cores just by unleashing his Charge Shot or the Giga Attack on it while it is exposed.

The attack each core can use is:

Nightmare Mother appeared as an unit card in TEPPEN. 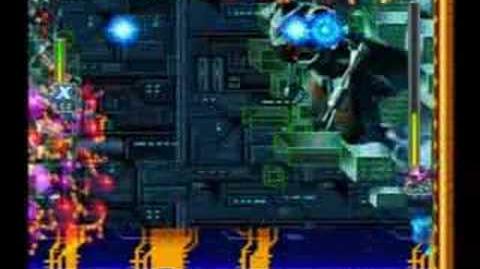 Retrieved from "https://megaman.fandom.com/wiki/Nightmare_Mother?oldid=356031"
Community content is available under CC-BY-SA unless otherwise noted.