Ninetails (ナインテイルズ) is a secret boss from Mega Man X: Command Mission. He is the strongest enemy in the game and quite possibly one of the most powerful Reploids in the Mega Man X series. He and his clansmen/clones are imprisoned in Central Tower's Special Sealed Area. To confront him the player has to obtain the Central Key by completing the game and face all the other Tails (Onetails, Twotails, Threetails, Fourtails, Fivetails, Sixtails, Seventails and Eighttails).

As all members of the Tails series are based off the same Reploid, they share some basic abilities. However, there are some notable differences between them and how they fight, all of which can be tied back to previous enemies X's party has faced during the command mission. However, all the Tails possess Annihilator Hadoken, which is a hit-all attack reminiscent of the Street Fighter series also produced by Capcom, and Puncture Arrows.

Ninetails has a large array of moves, making him hard to defeat. He can heal himself automatically when it's his turn. His attack "Nine Fragments" refers to his nine tails, which he stabs into his enemies rapidly, causing 8991 points of damage (9*999), which generally kills whoever it was used on. Furthermore, he has the ability to completely drain his enemy's weapon energy with his Puncture Arrows, and the Annihilator Hadoken (滅殺波動拳 Messatsu Hadouken), a large and devastating energy beam, that sweeps the area and inflicts heavy damage to all of his opponents, and has a 60% chance of being an instant kill, compared to the other clansmen/clones. Because of these attacks it's not a lie when he says, "My strength is unparalleled!"

Instead of normal armaments, the Tails series utilize martial arts and they have the ability to utilize powerful energy attacks and techniques without the need of an outside power source. Upon encountering X's team, each of the Tails simply challenges them to a fight, with the exception of Ninetails himself, who, as aforementioned, claims that his strength is unparalleled. 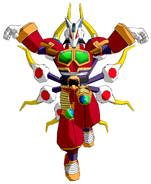 Front and side concept art of Ninetails.

Back concept art of Ninetails.
Add a photo to this gallery

Retrieved from "https://megaman.fandom.com/wiki/Ninetails?oldid=355504"
Community content is available under CC-BY-SA unless otherwise noted.